Transport for London are currently consulting on a draft new Road Safety Plan for London which sets out proposed targets and policies for the period up to 2020. The consultation period closes on 28 September and I strongly encourage everyone to respond - there is a questionnaire you can fill out to make it a bit easier.

I plan to do a few posts analysing the draft plan in detail, as it's quite an important document. This first post looks at how TfL describe recent trends in road safety in London; the next one will probably focus on the target they propose to adopt, and the last will look at some of the policies they do and don't propose to implement.

The number of road casualties, including the number involving fatal or serious injuries (crudely abbreviated in the jargon to 'KSI' for 'killed or seriously injured'), has fallen substantially in London over the last couple of decades, and TfL are rightly keen to highlight this. The headline figure is that the number of KSI casualties in 2010 was 57% lower than the average figure for 1994-98, which has been used as the baseline until now. This means that the overall target in the original London Road Safety Plan (first published in 2001 and then updated with tougher targets in 2005), for a 50% reduction in KSI casualties by 2010, was met.

But that first Road Safety Plan didn't just set an overall target for road casualty reduction. There were targets for individual modes too, to try and ensure that casualties were reduced across the board. Following the 2005 review, these mode-specific targets were:

There was also a specific target to reduce the number of children killed or seriously injured by 60%. 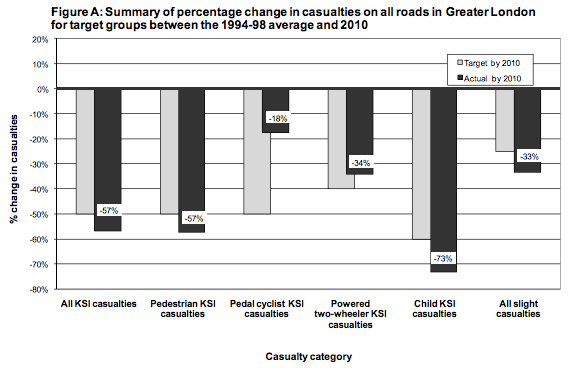 Strictly speaking, then, the original road safety strategy failed to meet its targets. TfL, however, argue that the failure to hit the targets for cyclists and motorcyclists was due to large increases in both cycling and motorcycling in London, and that the underlying casualty rate for both modes actually decreased.

I don't know much about motorcycling trends but over the longer term it is certainly true that the cycling casualty rate has fallen in London - see, for example, the chart below produced by Fullfact.org from TfL data. There are a few things you could say in response to this argument. The most obvious is that they can't have it both ways - TfL's target was to reduce the absolute number of cycle and motorcycle casualties, and if you go back to the 2001 road safety plan you can see that this target was set in the knowledge that use of both modes was rising. Secondly, if they now think that the rate of casualties per trip or per mile travelled is more important, then why not make that the target, or better yet set a target to reduce both the rate and the number of casualties? Thirdly, it is clear from the chart above that the cycling casualty rate pretty much flatlined between 2004 and 2010. And that trend doesn't include 2011, which saw a 22% increase in fatal or serious cycling casualties, probably outpacing the growth in cycling journeys. Again, if the cycling casualty rate is so important, isn't the record of the last several years rather worrying?

I'll look at some of these issues in the next post, which is about what target should be set. For now, I'd encourage everyone again to read the proposed new plan themselves and respond to the consultation.
Posted by Jim at 14:41