No, cycling is not safer in Britain than in the Netherlands

Giving evidence before the Transport Committee today, Ministers Mike Penning and Norman Baker declared that Britain has nothing to learn about cycling safety from the Netherlands because our rate of cycling fatalities per head of population is lower.

Given that both ministers immediately went on to note that many more people cycle in the Netherlands than in Britain (Mark has the quotes), it is difficult to know what to make of this*. It should be blazingly obvious that if hardly anyone cycles in Country A it is likely to have a lower rate of cyclist fatalities per head of population than Country B where nearly everyone cycles. Any Minister who claims this as evidence that cycling is safer in Britain is misleading either  parliament or themselves. Penning and Baker seem quite proud of their factoid, which implies the latter. That is worrying, and not just for cycling policy.

As many people on Twitter immediately pointed out, a reasonable measure of cycling safety would be to calculate deaths or serious injuries per mile or kilometre cycled. And in fact that's what the statisticians at the Department for Transport do. Their table RAS53001 shows trends in fatality and casualty rates per kilometre for various modes of transport. The fatality rate for cyclists in 2010 was 22 per billion kilometres, down by a third from 33 in 2001 but still some seventeen times higher than the fatality rate for those in cars.

So how does this compare to the Netherlands? We are fortunate that the Dutch road safety institute SWOV publishes comprehensive statistics on road safety trends in that country here - and in English too. These figures include fatality rates for the various modes of transport, equivalent to the DfT statistics mentioned above (note, SWOV calls passenger casualties 'Victims per seat').

In 2009, the latest year available, the fatality rate for cyclists in the Netherlands was 9 per billion kilometres, less than half that in Britain (21 in 2009). So cycling in the Netherlands, using a sensible measure, is more than twice as safe as in Britain. The evidence of the Ministers to the Transport Committee was wrong (as if that wasn't already obvious).

The SWOV data throws up some other interesting comparisons. The fatality rate for car drivers or passengers in actually lower in Britain than in the Netherlands (in 2009, 1.6 per billion km compared to 2.1). This means that in Britain, fatality rates for those in cars are 13 times higher than for those on bikes, compared to 4.4 times in the Netherlands. The chart below compares fatality rates for cars and bikes in the two countries - again, all based on official statistics. 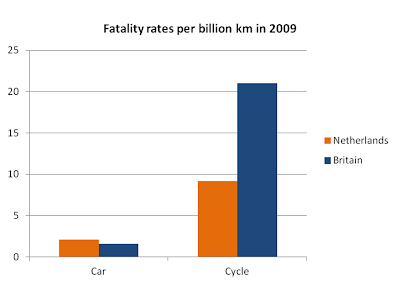 In summary, we have nothing to teach the Netherlands on cycling safety, and I trust the Transport Committee (and the Times, who will be reporting on the hearing) won't fall for such obvious nonsense from the two Ministers.

* It reminded me of the line in Ulysses to the effect that Ireland had the honour of being the only country to have never persecuted Jews "because she never let them in".
Posted by Jim at 13:35