Update! I've added figures for Helsinki (thanks Tommi) and Vienna (from here). Details are in the accompanying spreadsheet.

It would be very interesting and useful to have some statistics allowing us to compare the safety of cycling between different cities around the world, but this kind of thing is very hard to come by. As far as I can see it's nobody's job to collect statistics from cities in different countries, so at present nobody does it. In some places, individual city governments/authorities/mayoralties do collect and publish statistics, but only some of these are comparable with other cities. This post is the start of an attempt to collect together figures which we can use to compare London to other cities in terms of cycling casualty rates.

Please note, these figures are just initial estimates, cobbled together from available sources, some of which may not be correct. I would very much welcome any better information, and especially any similar information for other cities. If there's something here you think is wrong, instead of getting annoyed why not send me a correction?

The table and chart below show some summary information on distance cycled, cycle casualties, and the cycling casualty rate (per distance cycled) in Amsterdam, Copenhagen, Berlin and London (and now Helsinki and Vienna). This spreadsheet gives more detail on the sources, which where possible are official statistics but in a couple of cases (e.g. the total distance cycled in Amsterdam per day) are not. 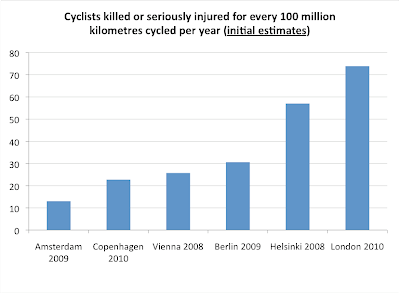 I should probably say that this certainly isn't an attempt to make London look like a dangerous place to cycle. While I think it could certainly improve on that score, I'm sure there are many, many cities with worse casualty rates. But most of them probably don't collect any robust, comparable statistics. There is a selection bias of sorts at work here, in that it is generally those places which have fairly strong cycling cultures which collect the best statistics on cycling.

I'd love to add some more cities, but comparable data is hard to come by. I looked around for data from Paris and found absolutely nothing, while I couldn't find any statistics on distance cycled in New York. Any help on these two or on any other cities would be really appreciated.

Another important caveat: In each case I've taken the city borders as read. Measuring the extent of a city is notoriously difficult, everyone does it a bit differently, and in most cases statistics are just based on administrative borders rather than any 'functional area'. So it maybe that with these statistics each city is defined differently, for example with some including suburbs and some not. I know that the London area used here includes a lot of suburbs, but I don't know whether the other cities do. I'd be interested to hear from anyone who does and who thinks this might significantly affect the answers.
Posted by Jim at 21:44 7 comments:

Cycling trends in London since 2001

A couple of weeks ago I wrote about how cycling to work became more common in Inner London and less common in Outer London between 1971 and 2001. This provoked an excellent post on the 'cycle of decline' in Outer London from David Arditti (see also here).

Now I'm going to look at what information we have on more recent cycling trends. The results of the 2011 Census won't be out for another year or thereabouts, so instead I'm drawing on the Department for Transport's National Road Traffic Survey data, which you can access here. DfT count the average daily flow of traffic on major roads throughout the country on a yearly basis, and there's more detail on how it works here. I used some of this data for a previous post on trends in cycling at Kings Cross.

DfT's data includes traffic counts at nearly 1,900 count points on major roads in London between 1999 and 2010, with a few gaps here and there. The usual major categories of motor vehicle are counted, as are cyclists. And by averaging all the counts in a particular borough you can get an idea of the trends at borough level, with the caveat that the data doesn't cover minor roads.

The first chart below shows the trend in DfT's average daily count of cycles between 2001 and 2010 in Central London (Westminster and the City of London), the rest of Inner London and Outer London. 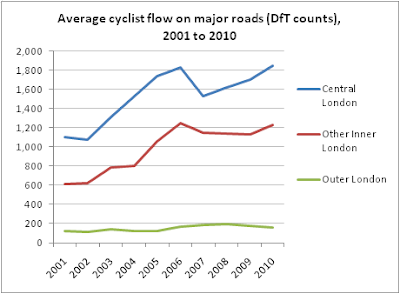 So what we see is an increasing divergence between the inner city and the outer suburbs over the last decade. The average cycle count increased by about three-quarters in Central London and doubled in Inner London, but rose by only about a third (122 to 159) in Outer London.

The chart below (click to embiggen) gives some borough-level data, showing the percentage change in average daily cyclists count by borough, with the Inner London boroughs in blue and the Outer London in red.

Update: I have added another chart, this time showing cycling's share of total traffic in each borough in 2001 and 2010. This shows that in the case of some boroughs (like Barnet) which have seen fairly high proportional increases the actual level of cycling (compared to overall traffic) is still quite low. 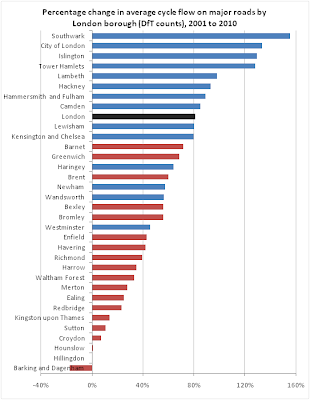 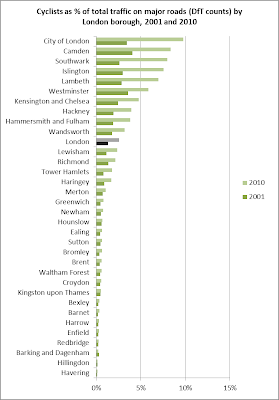 My post on Census data included a chart which identified a fairly close relationship between increases in car use and declines in cycling. The chart below plots the percentage point change in cars' share of average traffic flows versus the change in cycling's share, at borough level, and this time the relationship looks even stronger, with areas where cycling increased the most also seeing the biggest falls in car traffic (note, 'car' traffic here doesn't include goods vehicles). Those boroughs in the top left corner (with both big decreases in car traffic and big increases in cycling) are City, Lambeth, Southwark, Islington and Camden. The two Inner London boroughs where the share of car traffic has risen are Newham and Tower Hamlets. 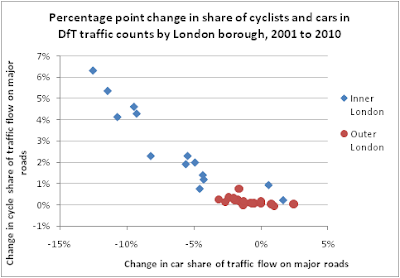 Finally, here are a couple of charts which show the change in the share of cycling and car traffic at each count point, arranged by distance in kilometres from the centre of London (Trafalgar Square, to be exact). There's a good bit of noise at the level of individual count points, but the overall patterns are still fairly clear - the roads closest to Central London generally saw the largest increase in cycling's share of total traffic and the biggest drop in car traffic's share. 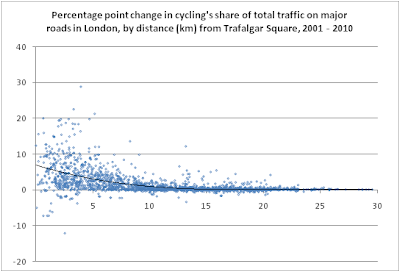 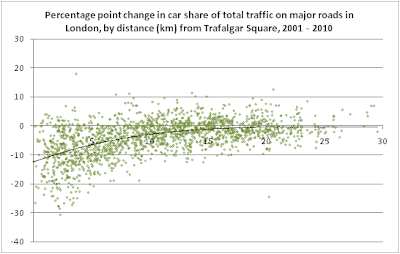