The colour of London's commute

Today saw the release of detailed Census data on, among other things, the mode of transport those in work use to get to work. One interesting aspect of this is the rising level of cycling in London, as described here by Cyclists in the City. I'll probably be looking at that later in the week, but first here is a map which attempts to summarise the transport mix across all of London in a single image. 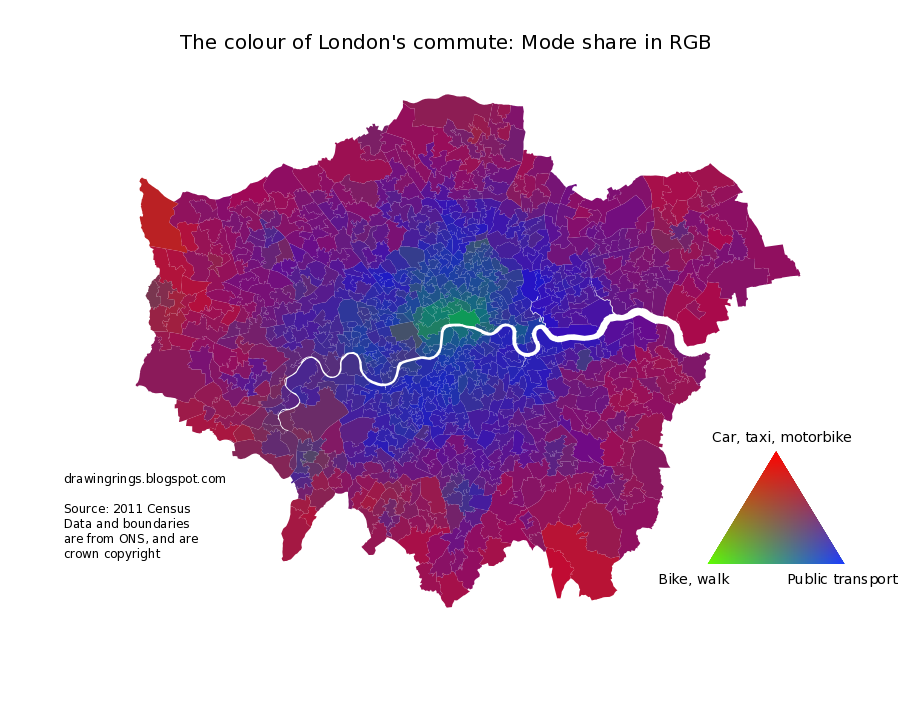 What the map shows is the mix of transport to work of residents living in each part of London*, using ONS data at Middle Super Output Area (MSOA) level. Each MSOA is given an RGB colour determined by the modal share, with red colours representing travel by car, taxi or motorbike, blue travel by public transport and green cycling or walking.

The result is a fairly simple pattern, with motor vehicles predominating on London's fringes, public transport in the inner suburbs and cycling and walking in the very centre. Those tendrils of blue reaching out presumably represent major public transport links.

A few details about the mapping technique for anyone who's interested: I was inspired to use the RGB approach by James Cheshire's map of election results and after some trial and error found a fairly simple way to do it in R which I can provide more details of to anyone who asks. The data and boundaries are both from ONS, the former downloaded from Neighbourhood Statistics. The maps exclude those people of working age who are not in work, who work from home or who use some form of transport so strange that ONS only describe it as 'other'.

* Edited this to make it clear that the map is based on place of residence, following @santacreu34's helpful comment.
Posted by Jim at 00:09