The urbanisation of cycling in London

I've just published a post over at LondonTransportData about what I think are some very interesting trends in the proportion of people who cycle to work in London. The data is from four successive Censuses, 1971 to 2001, and at London level it looks like this: Not all that interesting, but go below regional level and you get this. Here's the pattern at borough level:

On the basis of this data it looks like cycling in London changed from a mostly suburban to a mostly urban phenomenon over the course of a few decades, although it's worth bearing in mind that it remained very much a minority pursuit in both areas throughout the period. It would be nice to know why this change happened, and I'd be interested to hear any theories anybody has, bearing in mind that it all happened the introduction of the congestion charge, and mostly before we had much in the way of red routes, or 20mph zones.

Here a are a few theories on what might have caused this turnaround:

Traffic: There was less motor vehicle traffic in both Inner and Outer London in 1971 than in 2001. Perhaps as a result cycling conditions in the suburbs were relatively benign, as there was more space on the roads than in the inner city. But as traffic increased, two things happened: in Inner London, rising congestion made commuting by car painfully slow, so the bike became a more attractive option for some. But in Outer London, increasing traffic just increased the collision threat faced by cyclists, and most of them stopped as a result.

The Census data provides some tentative support for this hypothesis: as the chart below shows, car commuting increased much more in Outer London over the 40 year period, and across London there was a strong negative relationship between the change in car commuting and the change in cycle commuting. 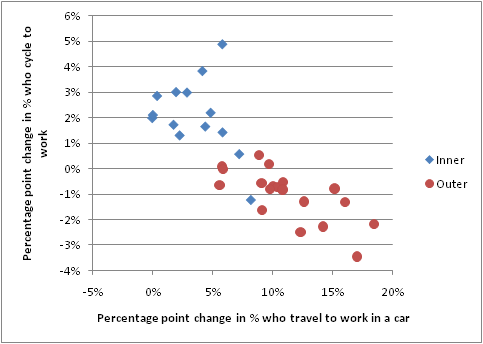 Infrastructure: Maybe it was all about changes in the provision of cycling facilities in Inner and Outer London, with cycle lanes and paths being added in Inner London and taken away in Outer. Or maybe there's a link with the first theory, in that the lack of infrastructure in Outer London didn't matter when there wasn't much traffic but became a deterrent when there was.

Labour market: Maybe it was the pattern of commuting that changed, with longer journeys less suited to the bike becoming the norm in Outer London over time. I'm sure there's data out there on trends in commute lengths, but it might be hard to disentangle cause from effect.

Of course, it could be a mix of the three, or something else altogether. But I think anyone interested in growing cycling in London needs to think about why this happened. I'd also love to hear whether there's any evidence of a similar pattern in other cities.
Posted by Jim at 08:53 3 comments: 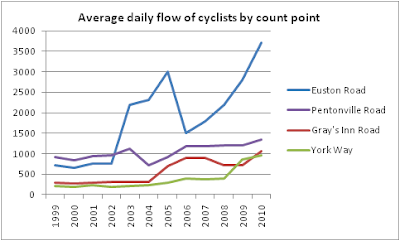 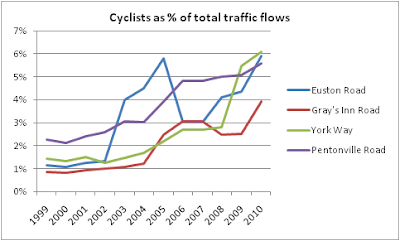 But whatever the reason, it's plain that people are cycling more in central London, even around objectively awful junctions like Kings Cross. That shouldn't be seen as an excuse for higher numbers of casualties, but as a powerful argument for driving down the collision rate faster than before.
Posted by Jim at 19:47 No comments:

Transport for London have published, following a Freedom of Information request, the analysis used to make its forecasts for the modal share of people using the new Blackfriars junction when it opens in 2012. Futilitarian has already critiqued much of the methodology, but I just want to focus on the forecast of cycling levels in 2012, which (as Futilitarian says) seems very much on the low side.

TfL forecast that cyclists will make up 6% of people using the junction in 2012: Their explanatory note says the cycling figures were derived as follows:

But other data presented in the same report suggest that the cycling trend in London as a whole is not the best basis for forecasting what is going to happen on Blackfriars Bridge. Figure 2.14, copied below, shows that the number of cyclists entering Central London during the weekday morning peak rose sharply between 2007 and 2009. 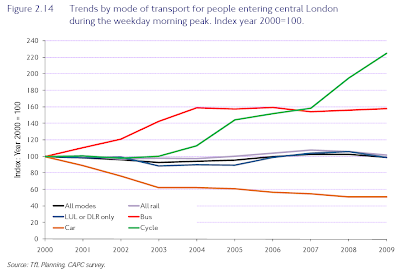 We can also look at traffic counts carried out on Blackfriars Bridge itself by the Department for Transport (search for Count Point 56614 here, select 'All years', then 'Save results'). DfT counted 4,676 bikes crossing the bridge in a 12-hour period in 2007, rising to 7,395 in 2010, which is a 58% increase in three years, equivalent to a 97% increase if sustained over five years - very similar to the estimate we got from the Central London cordon counts.

So it does look as if TfL have underestimated the likely growth in cycling on Blackfriars Bridge between 2007 and 2012, by using an all-London comparator rather than the more spatially specific data available.
Posted by Jim at 16:13 No comments:

Prof Henry Overman of the LSE has some interesting thoughts on lessons for urban policy from Dani Rodrik's book 'The Globalization Paradox'. I'm particularly interested in Rodrik's concept of an inescapable trilemma governing world economic affairs, according to which "democracy, national sovereignty and global economic integration are mutually incompatible: we can combine any two of the three, but never have all three simultaneously and in full". Or in graphic form:

I wonder whether a similar logic applies to 'localism' and land use policy, as follows


Or if you prefer the graphic version: 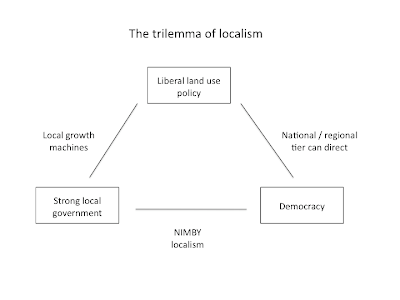 No doubt this is a little too neat, but I think there's something to it. Which is troubling for people who like all three things in those boxes.
Posted by Jim at 23:38 No comments: