History and cycling's mode share in Amsterdam and London

This presentation by René Meijer of the City of Amsterdam has a useful chart showing the transport mode split in Amsterdam by the length of the journey. 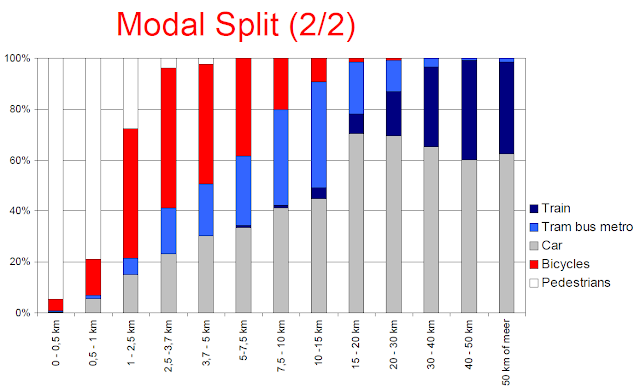 I've tried to recreate it for London, using data from the London Travel Demand Survey downloaded from TfL's Romulus website*. It's not possible to make an exact comparison, for a few reasons:

With those caveats in mind, here's the London chart. 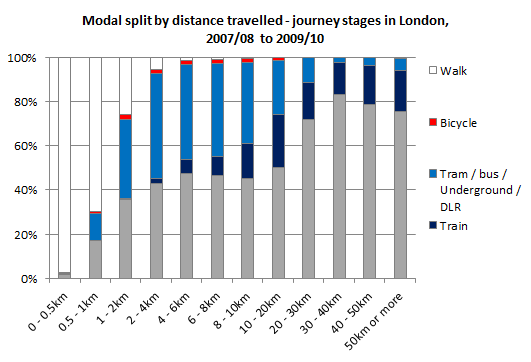 Note, I've tried to use similar colours, so the reason there's lots of red in the Amsterdam chart and hardly any in the London chart is that lots of people cycle in Amsterdam and hardly anyone cycles in London. The difference is huge, and seems to be made up by a mix of more travel by car and by public transport in London for trips of between 0.5 and 10 km.

London's high public transport share for medium-length trips (predominantly bus until for trips of up to 6km and predominantly Underground/DLR thereafter) is striking, and I think a little under-discussed in the debate about growing cycling. We have a pretty wonderful public transport network that competes against cycling both in terms of attracting passengers and, in the case of buses, for road space. Even though there is definitely scope for huge growth in cycling with the right policies in place, this starting point probably means we're unlikely to match Amsterdam's modal share even for trips of the same length. Cities can't choose their history, and that can make a huge difference to their future.