10% of Inner London gets to work by bike

A while back I posted an analysis of Census data showing the trend in the proportion of people who cycle to work in Inner and Outer London from 1971 to 2001. We won't have equivalent figures from the 2011 Census for several months, but we can use another source of information on travel to work, the Labour Force Survey (which I mentioned yesterday when talking about trends in car travel).

The chart below shows the proportion of LFS respondents in Inner and Outer London who reported using bicycles as their main mode of transport to work between 2004 and 2011. One important thing to note is that in each year the data is from the October to December quarter of the survey only, so differences in autumn weather from year to year will affect the results somewhat. Also, as with the car data yesterday these figures are estimates based on relatively small samples of people, and so they have largish confidence intervals around them. This means that there are few if any statistically significant year-to-year changes - but for both Inner and Outer London the trend over the whole period is fairly clear. 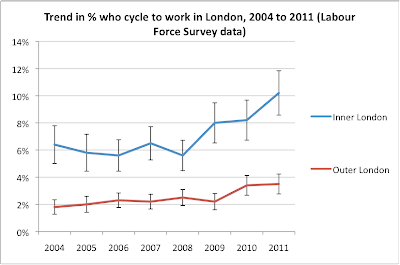 As we have seen before, cycling is much less common in Outer London, but at least it now seems to be rising, from a 2% share in 2004 to 3.5% in 2011. Not shown is the trend in the rest of the UK, but it's basically flat at around 3% throughout.

[Note: The LFS data here was downloaded from the Economic and Social Data Service]
Posted by Jim at 08:18