Rising cycling casualties: policy needs to catch up, and fast

We had new statistics on road casualties in 2011 at both national and London level yesterday, and in both cases the figures on cycling make for grim reading. The number of cyclists killed or seriously injured increased from 2010 levels by 15% nationally and by an even worse 22% in London. As the chart below shows, fatal or serious cycle casualties in London are down over the long term but up sharply in recent years. 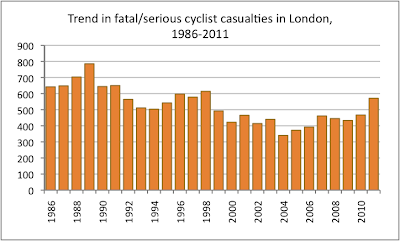 Naturally people are interested in what this means for the rate of cycling casualties per trip or mile cycled. Some other DfT figures released yesterday indicate that miles cycled nationwide rose by only 2%, which implies a large increase in the casualty rate (see road.cc's number crunching). TfL will probably not release statistics on cycle trips in 2011 until their next Travel in London report (probably just after Christmas) but I don't think anyone seriously expects cycling to have grown more than 22% in a single year.

And anyway, even if I'm wrong and cycling levels were up by more than 22%, would that make such a large increase in the absolute number of casualties okay? To illustrate the point, say the number of trips cycled in London grew by 25% each year for five years and the number of cyclists killed or seriously injured by 20%. Going by TfL's figures for 2010 from this report and assuming everything else stayed the same, then by 2015 we'd have 1.5m cycling trips a day, a modal share of 6%, a lower cycling casualty rate BUT over 1,000 cyclists killed or seriously injured a year. Should that really be considered a success?

Of course that's a slightly unrealistic scenario, but the point is that cycling casualties are rising at an alarming rate, in part because more and more people are choosing to cycle (for whatever reason). We all like to see cycling growing, but if it is not to result in truly horrific numbers of deaths and injuries then we need a complete transformation in cycling conditions in this city.

Fortunately there is, on the face of it, a political consensus around this issue, as in the run-up to the 2012 mayoral election every major candidate endorsed the London Cycling Campaign's 'Go Dutch' manifesto, which entails dropping our current approach to road design and embracing the Dutch ethos, including high-quality segregated cycle lanes on busy main roads. So really there should be no debate about the general principle of what do do, just about the details of how to do it. I hope the forthcoming London Assembly transport committee inquiry into cycle safety adopts this approach.

Of course Transport for London and various individual politicians will say that it can't be done in London because we don't have the space on our roads. But I think these latest casualty figures show that we have no choice but to make the space. To turn the old slogan on its head, we haven't built the infrastructure but the cyclists are coming anway, and as a result they're getting killed or injured in greater and greater numbers. They have forced the issue, and policy has to catch up.
Posted by Jim at 10:27