Following the recent tragic death of a cyclist in on Cavendish Road in Clapham, a local resident who witnessed the crash asked TfL what they could do to make the road safer, especially in light of a report back in 2008 which recommended that the junction in question needed to be redesigned to make it safer.

TfL said no. Here's their reasoning, posted by LCC on one of their comment threads:


...We found that in this section of Cavendish Road there had been 11 collisions in the last three years (up to 30 April 2011; collision data is supplied to us by the Police, and this is the most recent data available).  None of these collisions involved cyclists and two resulted in serious injury.  This particular section carries a large volume of traffic, more so in fact than the majority of other A roads in the borough.  Given the volume of traffic and when compared to other, similar roads there have been a relative low number of collisions on this section of Cavendish Road.  As I said, TfL is data led in its approach to progressing schemes on the Transport for London Road Network.  We could not progress a safety scheme at a location at which there had been fewer collisions than at other areas.  For this reason, we have no plans to progress a scheme at this section.  I appreciate that this is a sensitive issue, and would be happy to discuss further...

TfL appear to be saying that they will not consider trying to make a road safer for cyclists until a sufficient number of them are killed or injured on it. The obvious problem with this is that people tend to avoid cycling on a road if it seems unsafe or threatening, but by TfL's logic a road with no cyclists must be a road that is perfectly safe to cycle on.

I think this calls for cycle campaigners to try and produce some better data on how safe and friendly cyclists or would-be cyclists perceive different streets to be. We need objective data on subjective perceptions, in other words. This kind of thing is relatively easily available at large scales from sample surveys (see this recent one from Manchester for example), but what we're really interested in is identifying which individual streets and junctions are the most cycle friendly, and which need the most work to make them safe and inviting.

A while back I proposed something along these lines on the GB Cycling Embassy forums, with the idea being to get people to rate images taken from Google Streetview, but I haven't developed it any further, mainly because I don't have any IT skills.

But now some smart people from MIT have come along and produced something very similar called Place Pulse, which posts two random Streetview images from a handful of cities in the US and Europe and asks people which looks safer. Screenshot below: 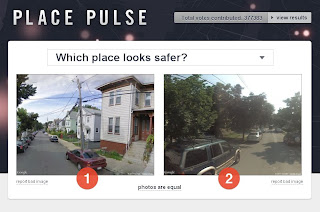 They then analyse the results to see which places look safer. It's striking how the places rated as safest are all in Austria and mostly very pedestrian friendly while the least safe are all car-dominated streetscapes in the US.
Place Pulse is focused on 'safety' in the widest sense, but it shows that you could do something similar for cycle safety, and then use the results to understand what people associate with safe or unsafe cycling environments. And then maybe we could get TfL to understand that they should be proactively trying to build streets that invite cycling.
Posted by Jim at 15:28