The BBC wants to know why Americans are so angry about petrol prices. Here's 'crossrider' of the Cycalogical blog:


The USA has the lowest petrol taxes of just about any developed country. So you would think that because they spend about half of what we do on a litre of motor fuel, petrol prices wouldn't be much of an issue. In fact, the opposite is the case. They have seen a much higher percentage increase in the forecourt price as the underlying oil price has risen, and because super-cheap fuel has enabled them to become highly dependent on big, thirsty vehicles for everything from shopping to commuting, and because they typically live further from their workplace than the average European, the sudden increase in the oil price has really squeezed ordinary Americans.

I think that's exactly right.  To go back to the BBC story:


At Tyson's Corner Center, a huge shopping mall in northern Virginia, motorist after motorist said it was hurting them in everything they did - the commute, the weekly shop or the school run.

Yes, if everything you do involves buying fuel, then increases in the price of fuel are going to hit you really hard. And it's not like Americans spend less on car transport than us Europeans. The price of fuel is low, but as crossrider says it has just encouraged the average American to consume more fuel, and to buy and maintain more cars than the average European. All that adds up.

For some numbers, see this fascinating paper on household transport spending in OECD countries by Jari Kauppila. His main chart is below (you might need to click for a larger version). 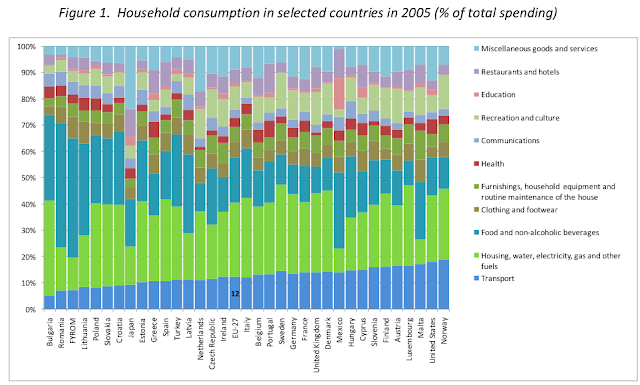 Looks like transport takes up about 18% of total spending for the average US household, compared to about 14% for the UK. Here's a breakdown of total US household transport expenditure: 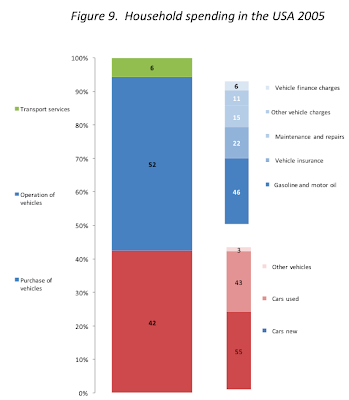 Only 6% of average US household transport expenditure goes on 'transport services', i.e. public transport (compared to about 26% in the UK. The rest goes on cars, whether it's buying them, maintaining them or fueling them.

By my sums that means the average US household spends about 17% of its total expenditure on cars, compared to about 10% for UK households. So the fuel may be cheap, but the whole package certainly isn't. And that's not including the wider costs of a car-dependent society, of course.
Posted by Jim at 18:34 No comments:

Map of cars per household in London

Somewhat related to yesterday's post, here is a map showing the average rate of cars per household across London. It's my first time using Fusion Tables to produce a map so I'm not even sure if it's going to work okay. And I can't seem to attach a legend anywhere, which is a bit of an issue ...

If it does work, what it should show is that, unsurprisingly, there are fewer car-dependent households in inner London than in outer. This is based on 2001 Census data, so it will be interesting to see if there are any significant changes when the 2011 data is eventually released.

Link to the Fusion Table.

Spaces for cars, spaces for people

At some point early in the previous decade, Britain reached what I think should be considered a significant landmark. The number of licensed private cars in the country surpassed the number of dwellings for the first time: in 1961 there were three dwellings per car, in 1981 1.8, and by 2008 it was 0.98 (though showing signs of stabilising). 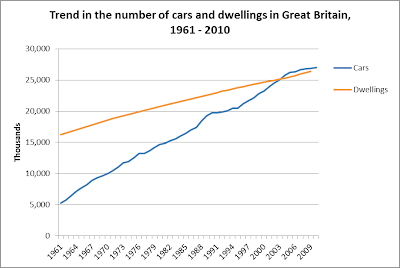 Obviously a car is a great thing to have for many people, if they can afford it, and as incomes have grown more people have found it a worthwhile investment. But a decent, affordable home is a good thing to have too, and I think it's interesting to contrast our enthusiasm as a society for allocating more and more space for cars with our hostility towards allocating more space for people to live in, as well as the very different government policies applied to each case.

Considering how expensive and cramped the housing in much of the country is, you might expect society in general and the various levels of government to be constantly striving to increase the housing stock. But what you actually see is amazingly energetic and committed grass-roots efforts to constrain the growth of the housing stock, which are then reflected in a very restrictive set of government policies. By contrast, people and government in most parts of the country seem united in their determination to increase the amount of car parking available. It's rational for every individual to want cheap parking for themselves, but the aggregate consequences are fairly perverse: you end up creating places like Hungerford and many similar towns around the country, where there are strict controls on using land for anything except car parking, so that car parking is made cheaper and everything else more expensive.

The growing number of cars is using up more of our time as well as more of our space. The more cars there are on the road, the more congestion there is and the more time each car spends sitting in traffic. And because both space and time are strictly finite resources, the opportunity cost of space and time given up to cars is only going to grow if incomes continue rising over time. We seem to be acting with a collective assumption that allocating more and more space to cars is a costless decision, but it really isn't. Over time we have turned many of our streets from places of movement into places for storing large metal boxes - just because the change has happened gradually doesn't mean it doesn't have very important consequences, many of them negative.

In short, I think the growth in the number of cars represents a significant resource problem for our society, one that seems to be receiving roughly zero strategic attention at the moment. What to do about it is an argument for another day: in general I think a combination of supply caps and market pricing would help a lot, but as we haven't even started having a debate about the issue yet any reasonable policies seem a long way off.

Sources for the graph: Private cars licensed from Department for Transport table VEH0103 here, number of dwellings from DCLG table 102 here.
Posted by Jim at 14:00 No comments: