Here's a really interesting post from Kevin Harris about the forces that fostered strong local ties in the post-war years, creating the kind of dense social networks where everyone knew everyone else:

Here are some contributory factors that come to mind:

- routinised lifestyles and a high proportion of mothers as housewives
- lower car ownership, with playable streets
- more local employment and local schools, to which people walked or cycled
- availability of local trade, ditto
- ties that overlapped in the spheres of leisure and workplace as well as home environment
- a heritage of deference to authority (which depended often on unhealthy, disempowering relationships)
- housing that people valued.

Sounds about right to me, and it highlights how an era that many seem to hearken back to resulted from a unique conjuncture of historical trajectories, some of which we probably wouldn't want to turn back even if we could, the lack of autonomy for women being an example.

I think it's particularly important to emphasise the geographically circumscribed nature of society and the economy at the time: overseas trade was much less significant in the 1950s and 1960s than today (see chart below, from here), which meant that effectively more people were producing for their neighbours, near-neighbours or compatriots, while both transport and communication technologies were more expensive and less widely available. That all meant that people devoted more time and attention to those nearby and so local ties were stronger, but partly because there was just less choice then. We've got much more choice now in what we consume and where we go and who we talk to - the potential spatial scope of our social networks has grown massively, so it's no wonder that local ties have weakened. 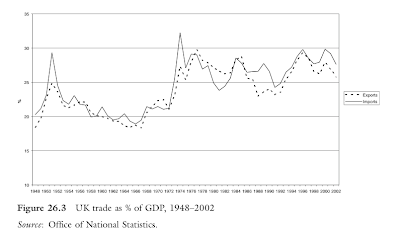 That's obviously not to say that the change has been unambiguously good. Maybe we've unwittingly crossed a threshold whereby the strength of local networks has collapsed more than we would consciously want. And anyone who wants to foster the desirable aspects of strong local networks probably needs to work a lot harder at fostering them (Kevin has some ideas), because I don't think the economic and social conditions that produced them in the post-war years are going to come back any time soon.
Posted by Jim at 18:00 1 comment:

Email ThisBlogThis!Share to TwitterShare to FacebookShare to Pinterest
Labels: networks

Rent is too damn high

Good news - Matt Yglesias is to write a book about housing policy, provisionally entitled 'Rent is Too Damn High' (see also). I'm fairly sympathetic to the broad Yglesian position on housing policy, which I understand to include the following points:

Pareto improvements are extremely thin on the ground in housing policy, more so than in most areas. This means that it is very difficult to please one group of people without severely displeasing another. For example, loose housing supply in a local area benefits newcomers but harms existing owner-occupiers, while tight supply harms (by excluding) newcomers but benefits existing owners. Existing owners tend to be economically self-interested and more politically powerful than would-be newcomers, so supply tends to be tight. Also, fragmenting land ownership arguably creates a kind of 'anti-commons' wherein individuals can block changes that would benefit society as a whole.

Housing supply decisions have economic, environmental, aesthetic and social ramifications, often in different directions - but very few of the actors involved in debates over housing have any incentive to take all of these into account, let alone the ability to do so. For example, a block of flats in a nice area might be undesirable on aesthetic grounds but provide cheap accommodation for those who need it. There are real and important dilemmas here, but they often seem to go unacknowledged. Another way of saying it is that housing policy affects the distribution of many important resources as much as income does, yet its distributional role seems to go mostly undiscussed.
Posted by Jim at 17:35 No comments: