Welfare localisation - A race to the bottom?

As I'm starting this blog a little later than I expected, some of the first posts might seem a bit prehistoric, concerning as they do stories that are up to several weeks old. Like this one from the Touchstone (TUC) blog, concerning a call from Richard Kemp of the Liverpool Liberal Democrats for the 'localisation' of control over welfare payments.

On the face of it, devolving full power over benefit levels to local councils makes some sense, as benefits set at the same level around the country may well be 'too high' in some areas, potentially harming work incentives, and too low in high cost areas, undermining the intended impact. And to the extent that councils have better knowledge of the problems in their areas and the right incentives to address them, devolving responsibility might make the overall system more effective at reducing poverty and helping people find employment.

But there are risks too. If the devolved budgets are not ring-fenced, meaning that money not spent on benefits can be spent elsewhere or used to reduce council tax, there may be a strong incentive for councils to lower benefit levels in an effort to push poorer households out of the area. Passing costs onto others where possible is often a sound business strategy, and if we want councils to act more like businesses in this respect we shouldn't be surprised if they start viewing households with high benefit levels as a much greater burden. Even if we assume genuine concern for poverty on the part of some local leaders, they may be reluctant to hold benefit levels above those of their neighbours for fear of attracting a greater influx of poor households than they feel their community can bear.

How likely is such a 'race to the bottom' in welfare expenditure? State and local governments in the US and some other countries have considerable influence over benefit levels, so that should give us a clue. Unfortunately, as with many such issues, drawing clear-cut conclusions is tricky due to problems isolating true causation. So, the results are ... inconclusive: make what you will of Brueckner, Volden and Berry et al.

Of course, the possibility of a race to the bottom in welfare depends on the exact policy being proposed. In more fiscally comfortable times, we might expect to see benefits tailored to local living costs but with ring-fenced budgets to avoid giving councils the wrong incentives. But as Richard Exell on the Touchstone blog points out, we do not live in such times, and that is reason to be wary of welfare localisation.
Posted by Jim at 22:41 No comments:

Municipal bike hire schemes are increasingly popular around the world, and here in London our own version seems to be bedding in pretty well. One of the most interesting side-effects of the new scheme has been the number of innovative visualisations popping up, of which probably the best looking is Oliver O'Brien's. It shows the location of each docking station, the number of bikes available, which stations are completely empty or completely full, and the total number of bikes in use, along with various statistics comparing usage over time. You can even run a very cool animation of the pattern of usage over the last 48 hours. 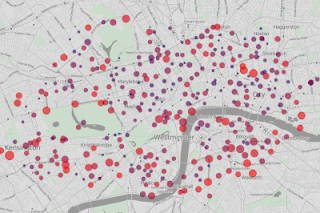 Now Oliver has outdone himself by creating similar interactive maps for 14 other city bike hire schemes from around the world (select them from the drop-down list on the main map page). They differ not just in terms of scale (from Paris's vast Velib to Girona's tiny scheme) but also in patterns of usage, with some looking more monocentric than others.
On top of the maps, there is now also a neat set of gauges allowing you to instantly compare scheme usage (and 'imbalance' between docking stations) across all 15 bike schemes. As well as being fascinating there is a lot of potential here for other cities thinking of setting up schemes of their own to learn what works and what doesn't. As an example, Mikael at Copenhagenize.com ran a sort-of scientific comparison of usage at 8am across the European cities in the sample. I was pleasantly surprised to see my home town of Dublin coming out with the highest usage, with 20% of bikes in use. Surprisingly Paris had relatively low usage at 4.3%, though of course a scheme that starts out concentrating on a small but very busy part of town is likely to see higher average usage than one which tries to cover a huge part of the city.
Looking outside Europe, Mikael notes that Melbourne's scheme looks distinctly unpopular. In what is probably not a coincidence, it is also the only one with a law making helmets mandatory for all cyclists. There's a lesson there ...
Posted by Jim at 21:50 No comments: