Together with some associates, I have started up a new blog which will cover London transport data. We gave it the witty name London Transport Data, and you can find it here, with a mission statement of sorts here. Expect some cross-posting, starting today.
Posted by Jim at 15:44 1 comment:

Email ThisBlogThis!Share to TwitterShare to FacebookShare to Pinterest
Labels: admin

The Department for Transport published new estimates of motor vehicle traffic yesterday, covering the years up to 2010 and quarters up to Q1 2011. There are a range of accompanying data tables but we have picked out a few trends specific to London. All the charts below show indexed trends, with 1993 set to 100. 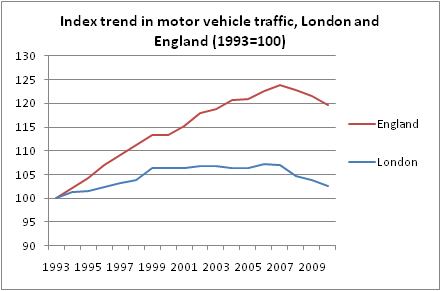 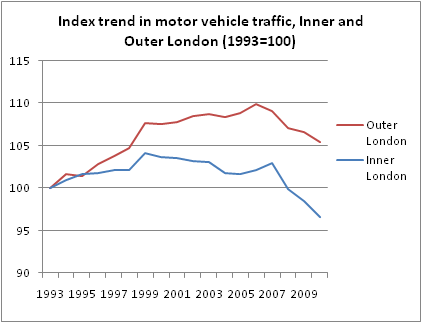 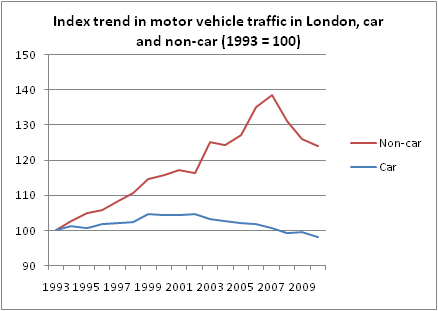 You can download the data for the charts in CSV format here.

Originally posted at London Transport Data.
Posted by Jim at 15:44 No comments:

See something or say something - Eric Fischer's flickr/Twitter maps 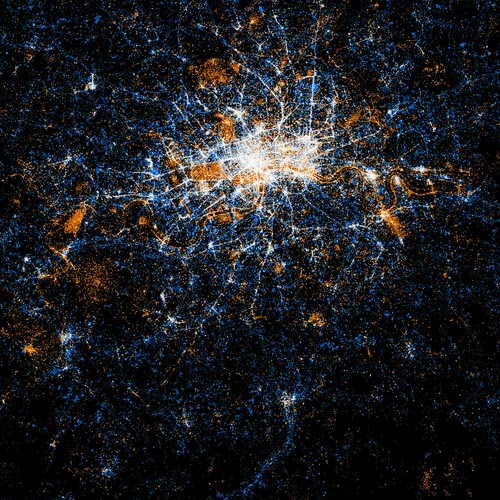 I was going to write up some thoughts on what we can learn about cities from Eric Fischer's beautiful new maps of tweets and flickr photos (London above), but this interview with Eric pretty much covers it. I would just add that 'flickr density' might be a useful proxy for amenity value in economic or geographic analysis.

You should also go enjoy the full set of maps here. The man's a genius.
Posted by Jim at 21:46 1 comment:

Email ThisBlogThis!Share to TwitterShare to FacebookShare to Pinterest
Labels: maps

Where the NIMBYs are

NatCen have a new report out summarising the results of a survey (commissioned by the previous government) into attitudes towards housing in England. There's lots of interesting stuff in there about tenure aspirations and so on, but I wanted to focus on the section about attitudes towards new housing supply. 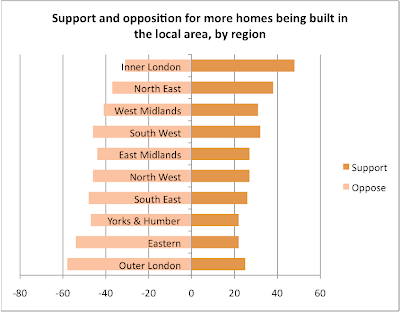 It's pretty striking that opposition to new housing supply is highest in Outer London and lowest in Inner London. Inner London is the only part of the country to have a substantial plurality in favour of new supply. 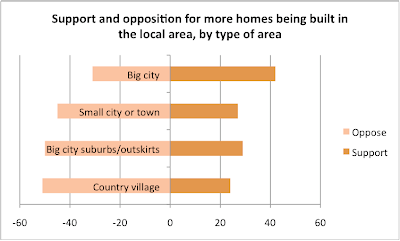 In general, it is in larger urban areas where support for new housing is highest and in suburbs, small towns or the country where opposition is strongest. But are attitudes just a function of geography or does that mask some other more important factors? 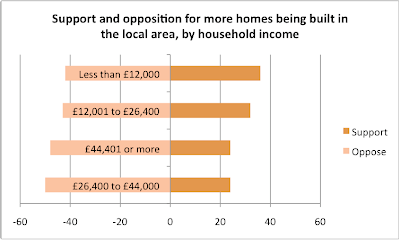 We can't really isolate causation from this data but the breakdown by household income is rather suggestive. It shows that the poorest households are the most supportive of new housing supply and those in the upper half of the income distribution the most opposed. 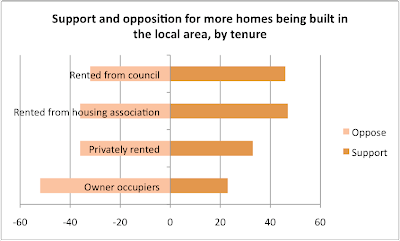 Finally, there are stark differences according to the current housing tenure of the respondent. People in social housing are on average in favour of new housing supply, people who rent privately are basically split, and a large plurality of owner occupiers are opposed.

The fact that Inner London has a higher proportion of low income and/or renting households probably goes a long way to explaining why it has the highest support for new supply in the country. The tenure comparison also supports the case for an economic rationale behind attitudes to new supply. Owner occupiers would tend to have the least need for new supply and the most to lose if new supply brings down house prices, while social housing tenants have little incentive to worry about lower local prices and are more likely to know someone who needs a home or be in need of one themselves. And perhaps private renters are somewhere in the middle.

As a final point, I'd just like to emphasise that we tend to think of attitudes to new housing supply as a personal matter, but it has potentially huge implications for the lives of other people. If we succesfully oppose new housing supply in our local area we make it more difficult for people to find a decent, affordable place to live. We may not ever meet those people or even be aware of their existence, but they exist alright. This is in large part a moral issue, and I think we should be willing to discuss our attitudes to it in terms of their moral consequences.
Posted by Jim at 22:24 No comments:

A couple of sources on cycle journey time reliability. First there's TfL's report of August 2009, which finds (para 10.4) that:


journey times are very consistent per rider, and far more independent of traffic conditions than [for] larger vehicles such as cars. Cyclists do not travel in the main traffic stream and therefore avoid the main barriers (barring signals) that other road users face

Then there's a survey done by the Chartered Management Institute in 2004, which doesn't appear to be available itself any more but is referenced in a few places, notably this Haringey Council document:


According to a Chartered Management Institute survey (2004) of 4,000 of their members, cyclists are more likely to arrive at work on time, and are more productive and less prone to stress than their counterparts arriving by car or public transport. The Institute found that 58% of cyclists say they are never disrupted by traffic, compared to only four per cent of drivers. Nine per cent of cyclists say they are stressed by their journey to work, compared to nearly 40% of drivers; almost a quarter of motorists feel their productivity is affected by the stress of their commute, compared to zero percent of the cyclists.

The upshot is that cycling journey times are very reliable, much more reliable than car journeys, because cyclists can usually filter through stationary traffic. This implies that if more people switched from cars to bikes then overall journey time reliability would go up, all else equal. But if your main measure of journey time reliability excludes cyclists and focuses only on motor vehicle traffic, as TfL's does, then the risk is that your attempts to improve reliability for motor vehicles will come at the expense of a mode which will always be much more reliable.
Posted by Jim at 17:49 No comments:

The New York Times is hosting a discussion on the somewhat over-hyped distinction it has drawn between European cities supposedly out to make motorists' lives a misery and American cities which are not. I like Tom Vanderbilt's contribution best, as I think it puts the idea that cities should be remade around cars in its proper historical place:


The idea that a city like New York could be made wholly compatible with the car looks increasingly antique, a paved-with-good-intentions fever dream now as obsolete as the idea of tower-block housing projects. As Michael Frumin, a transportation expert, once observed, if the morning subway commute were to be conducted by car, we would need 84 Queens Midtown Tunnels, 76 Brooklyn Bridges or 200 Fifth Avenues.

The car, with its exponentially diminishing collective returns — for example, traffic — is not the solution to mobility in the increasingly crowded cities of the 21st century. The sooner we put this flat-earth belief behind us, the faster we can get along with ideas for more efficient forms of mobility.

I love that phrase - exponentially diminishing collective returns!
Posted by Jim at 16:44 No comments: