A league table of press complaints

The Press Complaints Commission publishes annual reports summarising the number of complaints it receives and how it deals with them [1]. For a substantial proportion of complaints received, the PCC decides that the issue is either outside their remit (23% of complaints in 2009, by my count) or there was no breach of the code (20%). The remaining cases (i.e. those within the PCC remit and where there was a breach of the code) are divided into those which were resolved by some action of the newspaper (such as a printed apology or correction) or a much smaller number of cases on which the PCC chose to adjudicate and issue a formal ruling (see the PCC's explanation of its statistics for more detail).

The PCC lists these 'resolved' and 'adjudicated' cases on its website along with the name of the newspaper or magazine in question, but as far as I can see it doesn't tally these up by title so that we can see which titles racked up the most infractions. So I thought I'd do a league table covering the recently concluded 2010/11 financial year. The chart below shows those papers with four or more resolved or adjudicated complaints (expect where the adjudication didn't uphold the complaint) over the 12 month period. There is a long tail of papers not shown with one to three complaints, most of them local or regional titles. 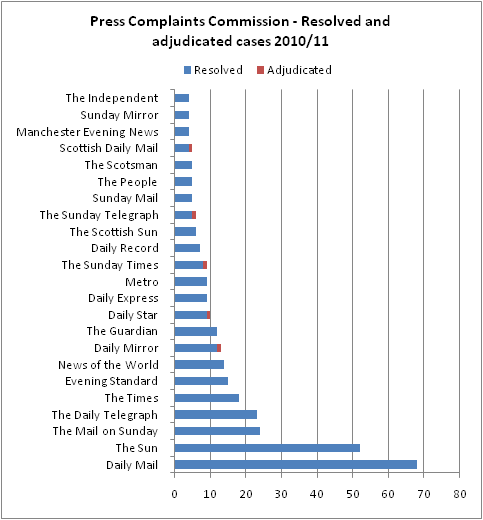 As you can see, The Sun and the Daily Mail are way out in front, with the Mail coming out on top with 68 resolved complaints over the year and the Sun on 52. Everyone else is far behind, with the Sunday Mail third on 24. The Evening Standard turns in a creditable score for a regional title of 15, while the more left-wing papers will need to take a long hard look at themselves after finishing in mid-table mediocrity or, in the case of the Independent, firmly in the relegation zone.

Email ThisBlogThis!Share to TwitterShare to FacebookShare to Pinterest
Labels: media

Who poses the most danger to pedestrians in Britain? 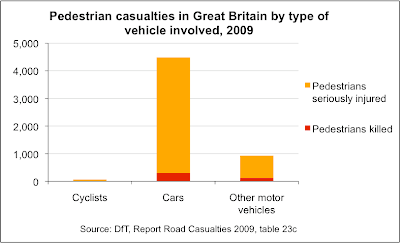 Possible follow-up: Who does the media treat as the greatest danger to pedestrians?
Posted by Jim at 14:30 No comments:

I've been reading 'Poverty and place in Britain, 1968-99', by Fahmy, Gordon, Dorling, Rigby and Wheeler. You'll need an academic subscription to access the whole article, but here's the summary:


To date, analyses of long-term trends in the spatial distribution of poverty in Britain have been frustrated by a lack of consistency in definitions, data sources and measures, as well as by changes over time in census and administrative geographies. This paper draws upon a series of national poverty surveys in order to derive methodologically consistent estimates of breadline and core poverty. These models are then applied to census data in order to describe the changing geography of poverty in Britain over the 1968 – 99 period. The primary concern is to reveal the changing spatial distribution of poverty that lies behind the headline figures. These analyses suggest that not only has poverty become increasingly prevalent amongst British households, it also became increasingly spatially concentrated between 1968 and 1999.

Yes, they found rising poverty between 1968 and 1999. Surprised? I was. Digging deeper, it seems they actually looked at two definitions of poverty, each of them different from the standard government measure: 'breadline' poverty and 'core' poverty.

The breadline approach is relative in that it "defines deprivation with reference to contemporary public perceptions of those items and activities constituting the material and social `necessities of life'". Using a series of four UK household surveys (from 1968/69, 1983, 1990 and 1999), "households can be identified as experiencing breadline poverty where they have both a low income and lack, because they cannot afford them, many of those items considered at each point in time by a majority of the British public to constitute contemporary necessities of life". Some complicated statistical techniques (which I'll come back to) are used to decide what really counts as a necessity at each point and how many of them you have to be lacking to count as 'breadline deprived'. This deprivation index is then combined with a measure of income poverty (defined, rather oddly I think, as an income lower than the mean of the non-deprived household income) to get a standard against which each household can be described as 'breadline poor' or not.

The core poverty approach is a more absolute measure in that it measures deprivation in each period against an unchanging list of necessities [1], and income against the more typical poverty line of 70% of the median household income of the time.

I have summarised the headline findings in the chart below: 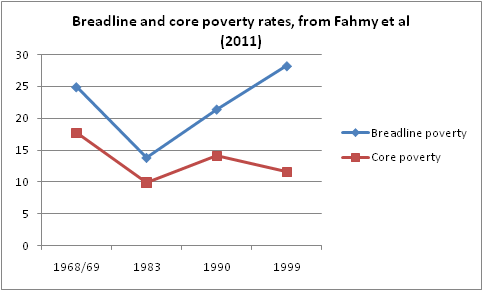 That's quite a divergence - and note that one poverty rate goes up over the thirty-year period and the other goes down, which isn't really the impression given in the article's summary. The reasons start to become clear when you see what was counted as a necessity in each period. 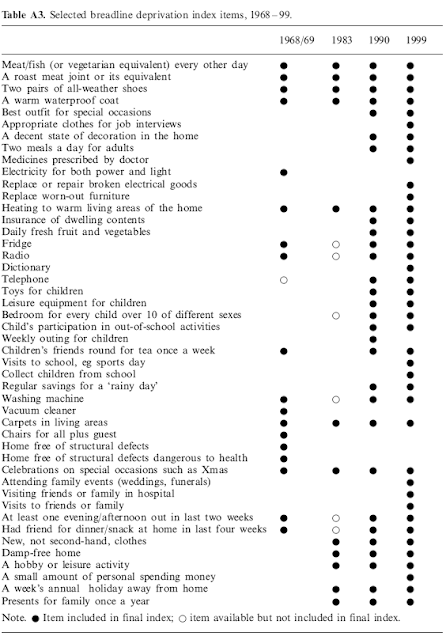 By my count there are 18 'necessities' in 1968/69 and 40 in 1999. Bear in mind that these are not arbitrarily selected by the researchers but based on surveys into what ordinary people thought were necessities. I think it's fascinating to see what people didn't think of as necessities in the 1960s [2]: two meals a day, medicines prescribed by a doctor, toys for the children, being able to visit friends or family in hospital, a damp-free home. This makes sense when you think about it: the fact that we have so many more 'necessities' today is because there are so many things which most people can't imagine being without, even though previous generations might have regarded them as luxuries. In other words, in absolute terms we as a society are much less materially deprived than we were thirty or forty years ago. You can see these trends in the table below. 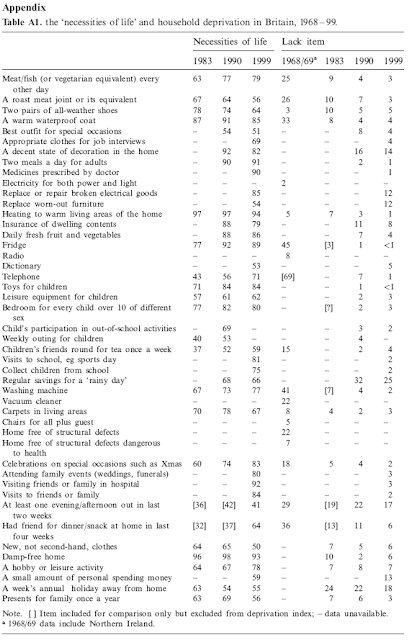 So how, then, do Fahmy et al come up with their picture of increasing breadline poverty? It seems to actually be a function of these same trends: the more 'necessities' there are, the easier it is to be deprived of some of them. But there is an extra twist: Fahmy et al did not use a consistent rule for 'breadline deprivation', such as lacking a particular number or proportion of necessities in each period. Instead, they seem to have derived 'optimal deprivation thresholds' for each period by comparing income poverty with material deprivation. The upshot of this calculation is that in order to be considered breadline deprived in 1968/69 you had to lack five or more necessities, in 1983 and 1990 three or more, and in 1999 just two or more. Again, this seems to be because in 1999 those who were 'income poor' tended to lack just a few material necessities, whereas in previous decades the income poor might have lacked quite a lot of necessities.

Now, to me this suggests that society in 1999 was better at ensuring the 'income poor' didn't lack necessities than society in 1968. But for Fahmy et al it shows that the 'optimal deprivation threshold' is lower in 1999 than in 1968/69. And what's more, when you remember that the list of necessities was growing all the while, it seems that it becomes easier and easier to be 'breadline deprived' - in 1968/69 it's measured as the proportion of households lacking any five of eighteen items, but in 1999 it's households lacking any two of forty items. When you factor in the very different income poverty measures used (for breadline poverty they use 'less than half the mean non-deprived household income', but for cover poverty they use the much more stringent definition of 'less than 70% of the total median'), it is no wonder that they find so much 'breadline poverty' in 1999 - their methodology, to my eyes at least, seems set up to generate more of it in more materially affluent societies.

The problem can be illustrated by comparing the 1960s to a few decades previously. There are many things which most people in the 1960s considered necessities which I think most people in the 1930s would probably not have: radios, washing machines, vacuum cleaners, maybe fridges. So by the methods followed in this paper you could not be 'deprived' for lacking these things in the 1930s, but you could in the 1960s. By the same logic, there will inevitably be things 30 years from now which people consider necessities but which we, if we have them at all, consider luxuries.

Perhaps you could argue that will make it very easy to 'feel poor' in the future. Personally, I think that's a bit of a stretch, and the same applies to the whole article by Fahmy et al. The relative deprivation approach to measuring poverty is a valid one, but it is not the only one. Conceptual problems abound when it comes to measuring poverty, and that is all the more reason to be circumspect in your conclusions, rather than making sweeping claims of the kind you find in their summary.

[2] Either because they didn't say so or because the question wasn't asked - from the way the article is written it's not clear to me which one actually applies.
Posted by Jim at 21:25 No comments: