Deaths on the road: The public health emergency of the 21st century.

Danny Dorling has a wonderful knack for encapsulating issues of inequality and social justice. The quote above is from his recent lecture entitled 'Roads, Casualties and public health: The open sewers of the 21st Century?'. You can see the slides and hear the recording here.
Posted by Jim at 16:27 No comments:

Matthew Kahn's blog on environmental and urban economics is well worth your time, and I really enjoyed this analysis of Joel Kotkin's recent piece on 'middle-class' cities. Read the whole thing, but I just wanted to pick up on one part of it, where Kahn writes:

Big cities such as NYC have been generous to their urban poor and to balance the budget taxes do need to rise. In the "efficient cities" that Kotkin celebrates such as

How do they treat their poor? There is a welfare magnets effect here. Cities such as San Francisco end up with more poor people and more taxes because they are "nice" to the poor. Non-liberal cities are rewarded for being not nice in terms of redistribution. While Kotkin would call that "efficient", there are other words for that such as "cheap" and "nasty".

Consider the dynamic at work in the 'liberal' cities Kahn describes*. City councils know that there are poor people out there they can choose to help or not. There are economic costs associated with pro-poor policies, in terms of some mix of higher expenditures, lower tax revenues, and distortions to the housing market (in the form of opportunity cost of land) if you directly provide 'public housing' or social housing as we call it. The net effect is to raise taxes or housing costs, which has a particularly negative impact on those middle-income households not poor enough to qualify for help. So there is a tendency for a city that wants to be pro-poor to become more unequal and push the middle-classes out.

I'm interested in the long-run impacts of this kind of process. Here's one scenario: if middle-income households are filtered out by higher taxes and housing costs, then higher income households might 'filter in'. Overall, the city grows richer, and so more costly, and so the affordability problems faced by the poor get worse. Simultaneously, the cost of providing housing support (directly or indirectly) for the poor also increases.

Where do we end up? Perhaps the presence of poor people in ever-richer cities eventually become too anomolous or 'costly' for some.I suspect that's a large part of what's happening in London now, with cuts to housing benefit and social housing provision.

*Kahn goes on to suggest that moving responsibility for redistribution to the federal level could deal with this problem, but I'm not convinced, as housing and planning policy are likely to remain both very important for policy towards 'the poor' and fundamentally locally controlled.
Posted by Jim at 17:46 No comments:

Eric Fisher's brilliant maps of ethnic group distributions in US cities, inspired by Bill Rankin's original map of Chicago, have rightly attracted lots of praise (see here and here). Eric's map of New York is shown below. Using 2000 Census data on the resident population, each dot represents 25 people with the different races colour-coded - White is pink; Black is blue; Hispanic is orange, and Asian is green. 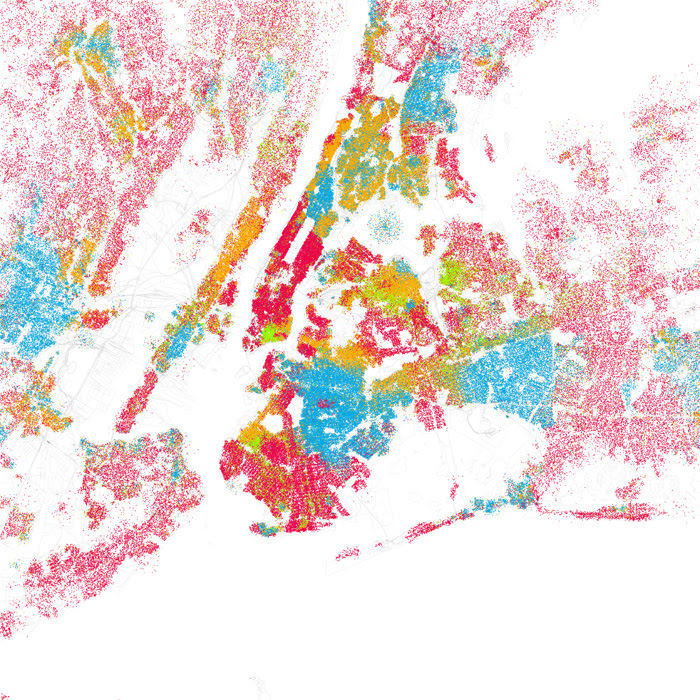 Having chatted with Eric over email about doing a similar map for London, I have produced a first stab at this below (click for a larger version). 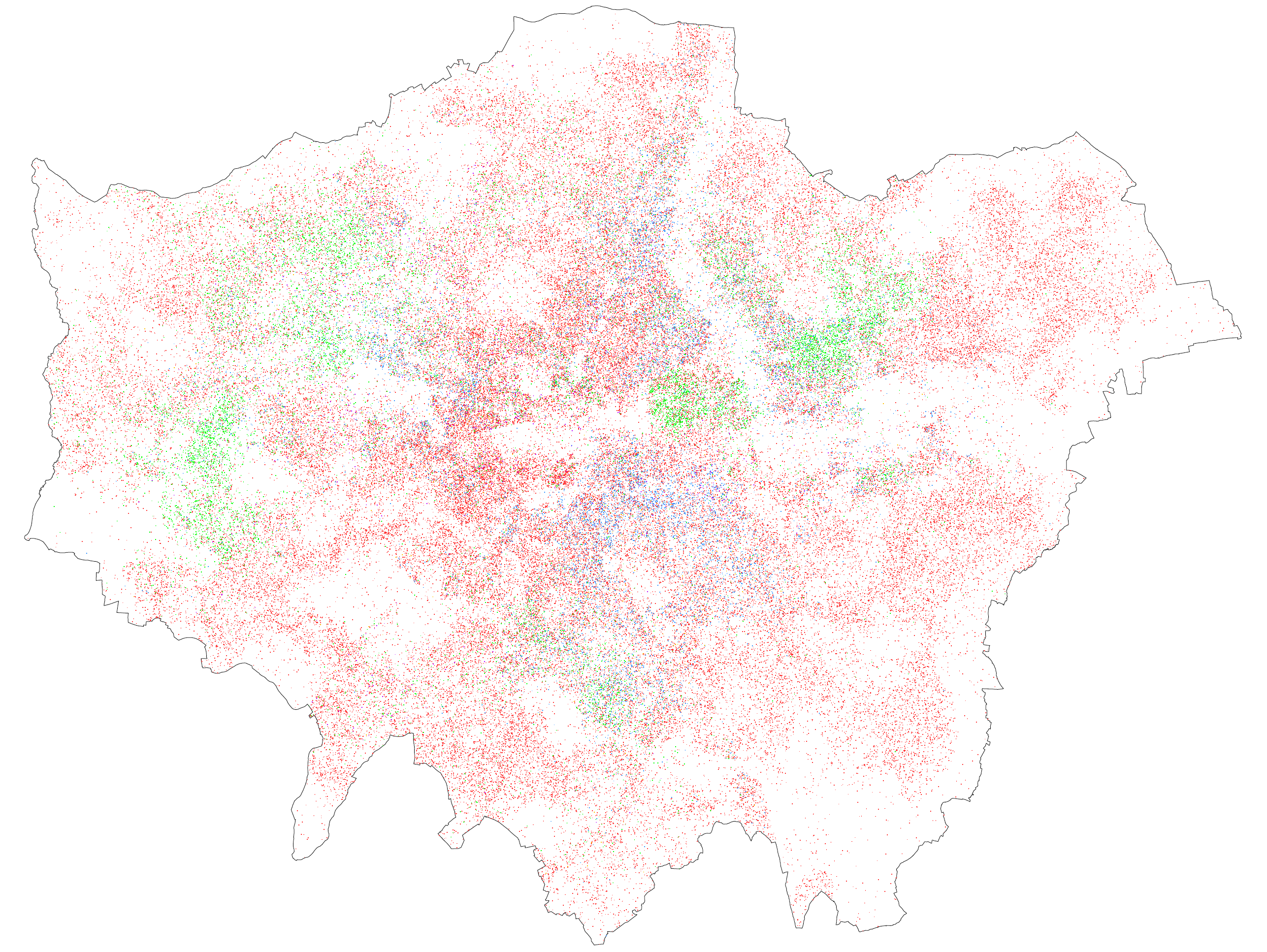 The colours aren't quite as vivid when viewed at this scale, but I'd encourage you to click on it to view at full size. I think part of the reason it's less vivid is that I use one dot for every 50 people rather than every 25, in order to avoid what I thought was too much clumping. But it might also be that there is less segregation in the first place.

It should be noted that the underlying data is a bit different. I use 2001 Census data at the Lower Super Output Area level, which is a larger geographic level than what Eric uses, so there is a bit more random scattering than in his maps. The problem, without going into too much detail, is that in the UK Census data at very small area is often slightly tweaked to remove even the slightest chance of identifying individual households, so the real number of (for example) Asian people in a neighbourhood might be slightly different from the number in the data. This problem is worse for the smallest geographic level (Output Areas) which is why I used LSOAs.

The ethnic make-up of London is also rather different from the typical US city. I used the following colour coding (the percentages indicate the share of London's population in 2001):
White - red dots - 71%
Black - blue dots - 11%
Asian - green dots - 12%
Mixed - purple dots - 3%
Chinese and other ethnic groups - orange dots - 3%

I'd be interested in anybody's comments about the map, in terms of both format and whether any conclusions can be drawn from it. At first glance it looks like London is less 'segregated' by ethnicity/race than most US cities, which would correspond with my preconceptions. Let me know what you think!
Posted by Jim at 10:47 2 comments:

In my day-job at the Greater London Authority, I have just completed the 2010 edition of Housing in London, which is our annual housing statistical digest and the evidence base for the Mayor's London Housing Strategy. You can get it here (warning, 10mb pdf). A few things stood out for me this year (note, these figures are copyright GLA and Ordnance Survey for map boundaries - see Housing in London for full details): Going back to old Greater London Council records I was able to extend our house building trend back to 1961. The data is split by tenure, with council housing on top, housing association supply in the middle and market housing on the bottom. Obviously the big change here is the end of the huge council house building program which dominated supply into the 1970s. 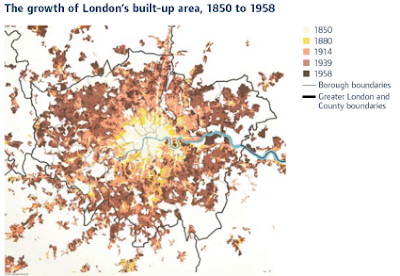 Also from old GLC documents (this one a Greater London Development Plan 'Report of Studies' from 1969) comes this wonderful map showing the growth of London between the 1850s and 1950s, with lighter areas developed earlier. This was originally painstakingly constructed from a series of Ordnance Survey Maps. I'd love to update it sometime. 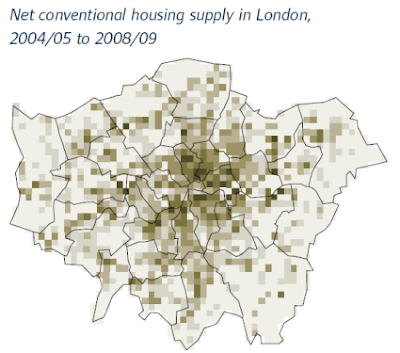 The pattern of much more recent housing supply is shown here, based on data from the London Development Database which I have aggregated on a 1km square grid. LDD data is incredibly detailed and I am currently working on a long-running paper trying to summarise some of the more interesting patterns. 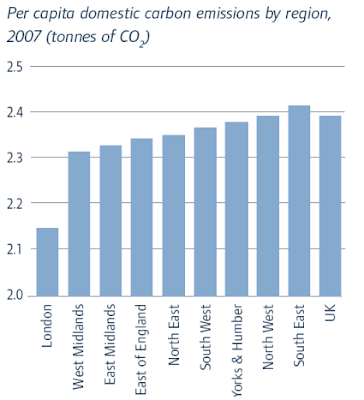 Changing tack, this chart shows per capita carbon emissions from housing (as opposed to from transport, industry etc) on a regional basis, analysed from DECC data. The chart cheats slightly by shortening the Y axis but even if we hadn't London still really stands out from the rest of the country. 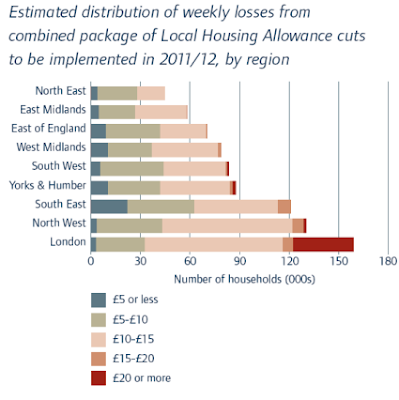 Finally, this chart attempted to summarise the impact of the government's proposed cuts to Local Housing Allowance (housing benefit in the private sector) on the English regions. More households are affected in London than anywhere else, and much more of them are hit hard, to the tune of £20 or more a week. Anyone who has been following the news will know that these proposed changes are causing quite the political storm at the moment.
Posted by Jim at 19:56 No comments:

Well, no sooner had I posted about Oliver O'Brien's work comparing bike hire schemes around the world than JC Deceaux wrote and asked him to stop scraping the data he used for the schemes in Paris, Dublin and several other sites. Happily, he could still use the historic data to put together this fascinating presentation going into a lot more comparative detail:

The Dublin scheme comes out as amazingly (to me, anyway) popular, and interestingly it shows three rather than two peaks in usage, with a lot of people apparently using them around lunchtime as well as in morning and evening rush hours (see slide 23).
Posted by Jim at 19:45 No comments:

There is a certain amount of disagreement over whether we have really had a proper house price 'bubble' in England, given that you would have expected a good deal of house price inflation just from the fairly large income gains in the decade 1998 to 2008 and the fairly constrained supply in many high demand areas in the South. 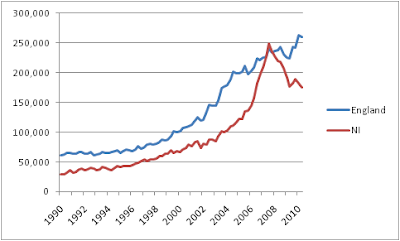 I got Irish house price data from the Department of Environment and Northern Irish and English house prices from CLG's table 505. I used annual data from 1990 onwards, and converted from nominal to real prices using the Irish and UK CPIs (there's a separate and interesting question about whether general inflation in Northern Ireland tracks inflation in the Republic more closely than inflation in Britain, but I'm not qualified to answer that one), and I rebased each trend to 100 to allow for easier comparison. The results are below: 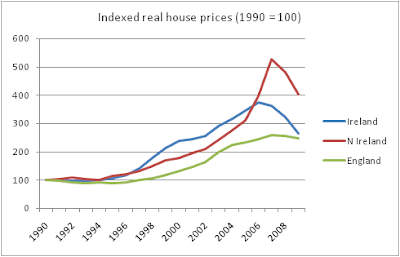 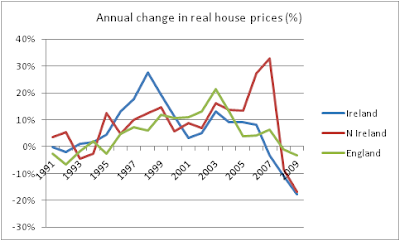 I don't know if this actually tells us much! The Republic's house price boom seems to have started earliest, and Northern Ireland's continued on even after the bust down south. If anything I think it reinforces the idea of the dizzying rise in prices in Northern Ireland as a pure bubble, mostly unaffected by outside forces.
Posted by Jim at 20:02 No comments: