The war for the streets

Aaron Naparstek's article from a few months ago on the 'war for the streets' in 1920s America is well worth a read:


University of Virginia professor Peter Norton details the early history of the car and the city in his wonky but fascinating book, Fighting Traffic. He describes the “blood, grief and anger in the American city” and the “violent revolution in the streets” of New York and other U.S. cities as automobile owners bullied their way on to city streets, literally, leaving a trail of mangled children’s bodies in their wake.

In the 1920s, motor vehicle crashes killed more than 200,000 Americans, a staggering number considering how many fewer cars actually existed in those days. These days, 35,000-or-so Americans are killed in car wrecks annually. Most of the dead are drivers and passengers on highways and in rural places. In the 1920s, most of the dead were kids living in cities. In the first four years after the Armistice of World War I, more Americans were killed in car wrecks than had died in battle in France...

Cars were a nuisance and intruder on city streets and drivers were seen as “tyrants that deprived others of their freedom.” City streets were places where kids played, pushcart vendors sold goods and a wide variety of vehicles and traffic moved and intermingled mostly at human-scale speeds. New Yorkers and city people all across America “saw the car not just as a menace to life and limb, but also as an aggressor upon their time-honored rights to city streets.”

It was a war which the car won hands down:


Yet by 1930, the backlash was largely over. The automobile had secured its place on city streets and motordom had won. Rather than conforming to the demands of the American city, the city began its decades-long process of conforming itself to the needs of the automobile...

Changing a city’s infrastructure takes decades. Changing social mores can happen much faster. “Before the city could be physically reconstructed for the sake of motorists, its streets had to be socially reconstructed as places where motorists unquestionably belonged,” Norton writes. By 1930, that social reconstruction was largely complete. New Yorkers had mostly accepted the automobile in their midst, despite the fact that 10 years earlier, many considered it to be nothing more than street-clogging, exhaust-spewing, horn-honking, child-killer owned and operated by a small number of wealthy elites.

As Naparstek says, those statistics on road casualties in the 1920s are shocking, in comparison to much smaller casualty figures today which we quite rightly regard as unacceptable. I was interested in what the equivalent figures might be for London, so I put together the chart below from a range of sources, mostly annual statistical abstracts published by the London County Council or its successor the GLC. The chart shows the trend in annual traffic fatalities in London between 1901 and 2010, with the red line (up to 1966) referring to the Metropolitan Police District area and the blue line (1966 onwards) the current Greater London area, both including the City of London. 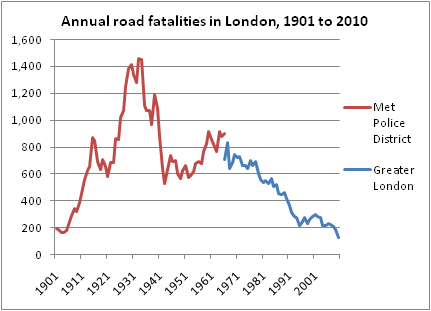 What the chart shows is that annual traffic fatalities in London rose rapidly from the start of the century, with an interruption at the time of the first world war, and peaked in the early 1930s. In 1933 1,458 people were killed on London's roads. That's an average of four people every day. The general trend has been downwards ever since, apart from another large trough during the second world war and the subsequent rationing period. In 2010 'only' 126 people were killed on London's roads, less than a tenth of the 1933 figure. There were many more non-fatal casualties too, with a total number of casualties (deaths plus injuries) of 59,080 in 1933 and 60,958 in 1934, more than twice as much as in 2010*.

Overall, the 1920s and 30s saw a level of carnage on the roads that would be difficult to imagine today. I don't know much about the metropolitan politics of this period but my understanding is that the London authorities responded in much the same way as those in America: by trying to get pedestrians and cyclists out of the way of motor traffic, and by making the roads 'safer' for cars to drive through, mostly by widening and straightening them. Individuals, for their own part, sought to protect themselves: people who could afford cars bought them, and overall car ownership grew very quickly. At the same time, businesses were switching en masse to motorised transport.

These were all understandable reactions, and over the long run we did see road deaths come down (partly for a host of other reasons, of course), but not without huge costs. By making life harder for pedestrians and cyclists and easier for drivers, the authorities reinforced the individual incentive to protect oneself in one's own steel box, and helped make the car completely dominant, which brought problems of congestion, pollution (which kills plenty of people itself, none of whom are shown in that chart), noise and an ever-present danger which sucked the life out of so many city streets.

It's worthwhile considering an alternative history, one in which the city authorities tried to tackle the problem of road deaths at its source rather than seeking to make roads safer for cars. What if they had imposed a toll or charge on motor vehicles equivalent to the costs they imposed on everyone else, or banned them altogether from parts of the city? Traffic levels would have been much lower, pedestrians and cyclists would have felt safer, and there would have been much less need to redesign streets to accommodate motor vehicles. Car ownership would presumably still have grown, but not to the point where it dominated everything else. We might have ended up in a good equilibrium were people felt free to choose less damaging forms of transport, rather than the one we're in now.

It's easy to say this in hindsight, obviously. The political will and perhaps the technology were not in place to do this in the early 20th century. But that doesn't mean we have to live with the consequences of the wrong decision all these years later. London has already gone some distance towards reducing the dominance of motor vehicles in the city centre, but we can and should go further.

* Total casualties, as distinct from fatalities, didn't actually peak until 1967. I'm planning a post for londontransportdata that will go into all this in more detail.
Posted by Jim at 16:44