A couple of weeks ago I posted a map showing the mix of commuting modes by ward in London from the 2011 Census, and this week I'd like to focus on the change in cycling levels since 2001. The maps below (click here and here for PDF versions) show the change in cycling, again at ward level, first the change in the number of people cycling to work in each ward and then the change in cycling's share of all commuting. I've included both because the numerical increase is interesting but can be distorted by differences in population growth. 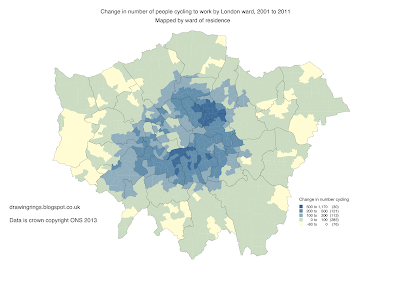 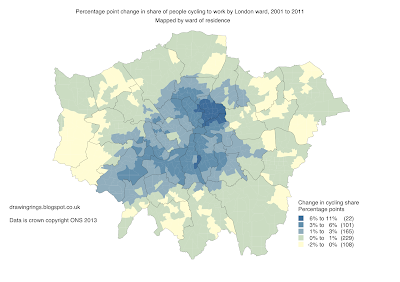 In both maps the yellow areas represent areas of decline, the greens no change or moderate growth, and the blues higher rates of growth.

Growth in cycling commuting is concentrated in inner London and the South West, with the greatest increase in both proportional and absolute terms in Hackney. A couple of other patterns jump out: the rich boroughs of Westminster and Kensington and Chelsea are exceptions to the inner London rule, showing very little growth in cycling over the last decade, probably due to a combination of car-friendly policies and demographic factors. Newham also stands out as showing very little growth, suggesting that the river Lee or rather its crossings may be quite a significant barrier, hopefully something the new superhighway will address. South of the river there look to be pockets of high growth, in numerical terms at least, along the routes of Cycle Superhighways 7 and 8 and in a few other areas.

But while most of inner London saw pretty good growth in cycling over the decade, Hackney is clearly the star of the show. In 2001 4,940 people in Hackney said they cycled to work. By 2011 that had more than trebled to 17,312. Hackney's workforce grew at the same time, but there was a big increase in cycling's commuting mode share too, from 6.8% in 2001 to 15.4% in 2011 (in both cases excluding those working from home). In five wards cycling's mode share grew by more than ten percentage points. As Cyclists in the City pointed out, more people commute by bike in Hackney than by car or van.

There's an interesting debate to be had about whether the Hackney trend is due to demographics (an influx of young carless people), the emergence of a fairly localised pro-cycling sub-culture, or Hackney council's approach to road safety. Danny says here it's about policies and I've no doubt they're an important factor, but in my admittedly partial experience cycling in Hackney is no better than in Islington so I suspect demographics and culture have played a role too. We may know a bit more when more detailed Census data on who is cycling where comes out later in the year.
Posted by Jim at 21:34