The last couple of weeks have seen some interesting figures confirming the decline of car culture in London. First, the 2011 Census results showed, as summarised by London City Cyclists, that the number of car-free households is growing across Inner London. Then the National Travel Survey showed that car travel per person in London fell 22% in just seven years (table NTS9904 here). Finally, as pointed out by Angus Hewlett on Twitter, here's a survey (admittedly from a fortnight ago) showing that "One in seven Britons said they were part of a household which owned a car that was only used occasionally", a figure that rose to one in five in London.

That survey suggests that car ownership has some way to fall yet in London. To get a better sense of this I plotted the trend in distance travelled by car (from DfT table TRA8905a) against the trend in the number of cars (from table VEH0204) for London and England as a whole in the chart below. Both series are rebased to start at 100 in 2000. 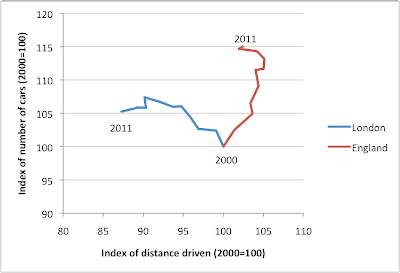 What this shows is that in England as whole the number of cars has risen 15% since 2000 and the distance travelled by car just 2%, while in the Greater London area the number of cars has risen 5% but the distance travelled by car has fallen 13%. The leftward turn in both lines is an indicator that distance driven per car is falling in both London and England, but it's falling particularly fast in London, in fact by 15% since 2000. The average car in London drives around 9,100 km per year (down from around 11,000 in 2000), compared to 13,800 km a year for the average car in England as a whole (also down, from 15,400 in 2000). 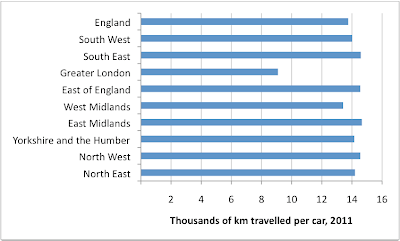 So it's no surprise that there are lots of 'ghost cars' hardly being driven in London, or that, particularly in the last few years, many Londoners are deciding that it's just not worth the cost and hassle of owning one. I'd expect this trend to continue for some time yet and the number of cars in London to shrink further (though it is worth bearing in mind that across London as a whole there are more cars than there were in 2000). I just hope we use the extra space freed up for useful things rather than just dropping the cost of parking even further.
Posted by Jim at 23:03