What the congestion charge did

The London congestion charge was ten years old this week, which provoked a bit of discussion about it, most notable for the absence of anyone seriously calling for it to be abolished. As Adam Bienkov points out, its introduction in 2003 was by contrast preceded by an avalanche of criticism and predictions of doom, much of it motivated more by political grievance than by evidence or principle.

I think the best way to get a sense of the C-charge's impact is to look at Transport for London's data (here, under 'Central London Peak Count') showing how people travelled into central London during the weekday morning rush-hour between 1978 and 2011. The chart below shows the trend for people arriving by car or motorcycle only (for some reason TfL don't separate the two out). 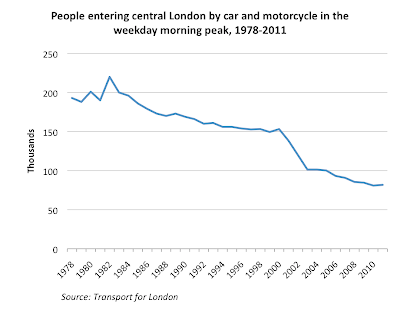 The number of people entering central London by car (and motorbike) has clearly been trending downwards since the early 1980s, but just as clearly there was a very big drop in the early 2000s. What's really interesting is that although there was a big dros (of about 20,000) in 2003, the first year of the C-charge, that was preceded by two years of almost equally big drops in 2001 and 2002. I don't know very much about what transport policy was like back then but given that the same TfL data shows a concurrent spike upwards in bus ridership it does look rather like a generalised 'Livingstone effect' rather than something limited to the congestion charge alone, though obviously that was a very important part of it.

More recently the decline in car traffic has slowed a bit and in 2011 there was even a small increase, though hardly a noteworthy one. And if anyone is dissatisfied with current congestion levels in London, as for example the AA seem to be, the obvious answer is to campaign vigorously for an increase in the charge.
Posted by Jim at 22:51