More cycling than car traffic in central London during the Games?

Just a quick post speculating on a couple of interesting bits of info about transport trends in London. First, according to @bitoclass on Twitter TfL have said that cycling in London increased 22% during the Olympics (presumably compared to last year). Second, TfL have also said that vehicle traffic in central London fell considerably during the Games period, though I haven't seen any firm figures. Third, recall that even before the Games car traffic in central London was falling and bike traffic rising, with the two looking likely to converge pretty soon: 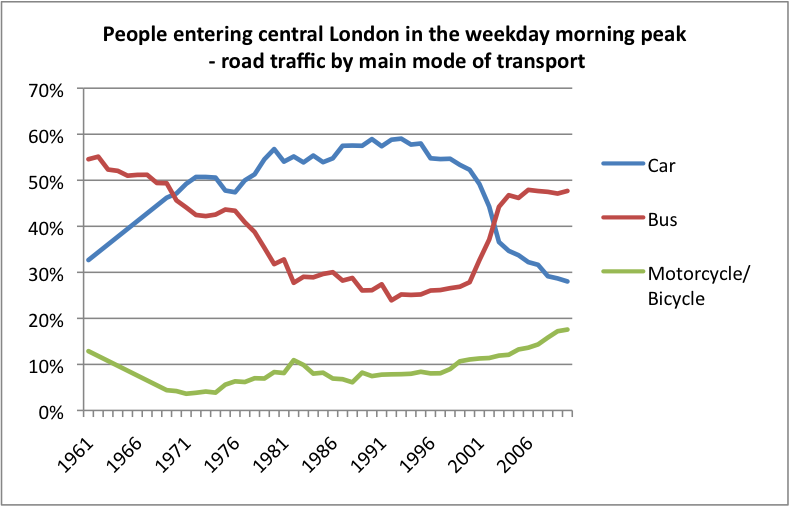 Putting these together, my guess is that cycling accounted for more journeys than cars in central London during the Games period, for the first time in probably 60 years or more. Quite a milestone if so.

[Update: Paul (@bitoclass) has kindly posted a pic of the TfL presentation slide which was the source of his factoid:

In any case, we'll probably have to wait until January or so for TfL to update the trend in my chart above. From a policy perspective, perhaps the more interesting question is whether these short-term changes in travel patterns will persist. Cycling through central London yesterday it certainly felt like the vehicle traffic was still very light, but in the absence of any more restrictions I would expect it to creep back to something close to pre-Games levels over time. Or perhaps it won't, if cycling levels stay high - after all, it does seem like once people make the leap to start cycling that a lot of them find it works for them, and in one way or another the Games have probably encouraged plenty of people to make that leap.]
Posted by Jim at 19:57