The Department for Transport publish full data on recorded road casualties on data.gov.uk, and I've been playing around with the data a bit recently, partly as a way of learning some new software skills.

The map below (best viewed at full size) is one result, and shows serious and fatal pedestrian casualties in London in 2011 which were the result of collisions with bikes (in red) or cars (in turqouise). Bigger circles represent fatalities and smaller ones serious injuries. 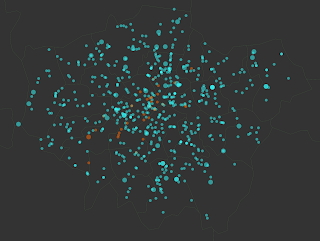 Techie details: I downloaded the csv data for casualties, accidents and vehicle records for 2011, used R to merge and filter the data, used QGIS to convert the data to a shapefile, and used Tilemill to combine that shapefile with some other layers, apply stylings and export to PNG. Tilemill does some puzzling things like leaving some of the markers brigher than others for no apparent reason, but hopefully that will be ironed out in future versions.
Posted by Jim at 18:20