Many ways to go green

Massachusetts officials on Wednesday announced a plan to curb heat-trapping gases emitted by homes, cars and businesses in the state by 25 percent below 1990 levels over the next decade.

The targets set by the plan are the highest allowed under climate legislation passed by the state in 2008 and among the most stringent in the nation, placing Massachusetts in the company of California, New Mexico and other states that have taken strong action to address global warming.

Unlike California’s plan, however, which sets industry-by-industry regulations to achieve its mandated cutbacks, the Massachusetts plan relies largely on existing programs, like renewable-energy mandates, energy-efficiency standards for building construction and curbs in the electricity sector that are already in place under a multistate agreement known as the Regional Greenhouse Gas Initiative.

There's plenty to like here, in terms of improving home energy efficiency, cap-and-trade for utility firm emissions, and introducing pay-as-you-drive car insurance. But I have a nagging concern about state-level initiatives of this kind, because of the potential perverse incentive to reduce carbon emissions simply by holding down population growth. And indeed, population growth in Massachusetts, at 3.9% between 2000 and 2009, is well below the national average of 9.1% (data). On the basis of the very simple comparison of CO2 emissions in selected states in the chart below Massachusetts looks very good, but most of the difference is down to very different population growth trends. 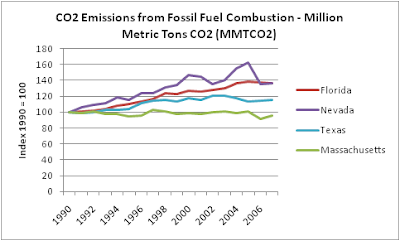 The policies being proposed by the Massachusetts state government sound like they should reduce per capita emissions, and that's great. But a more cynical state government could take a different approach. In general, climate change mitigation is one of those things best done at as high a level as possible, precisely because of the kind of perverse incentives that could arise in state-level approaches. Besides which, we really don't need to give places like Massachusetts any extra incentive to restrict housing supply.
Posted by Jim at 21:31