Quantifying the costs of road casualties in London, by borough and mode of transport

Injuries and deaths as a result of road collisions impose huge costs on our society, both on the people directly involved and an others more indirectly affected. While everyone will react differently to being in a road collision, we can try to quantify the average social and economic impacts in order to get at the overall cost to society as a whole and hopefully provide a further incentive for change.

The Department for Transport estimates the total cost of a road fatality to be around £1.7 million, of a serious casualty around £190,000, and of a slight casualty around £15,000. These are arrived at using the 'willingness to pay' economic method, and are meant to take into account the 'human costs' of suffering and grief, lost economic output due to injury or death and the costs of medical treatment.

Using the same average costs, Transport for London estimates the total cost of reported road casualties in London in 2011 to be around £2.35 billion. Since TfL also provide data on the location, mode and severity of each casualty in London in 2012, we can use the same figures to see how these costs vary from borough to borough and mode to mode.

The chart below shows the estimated total social and economic cost of reported road casualties in 2012 by borough and the casualty's mode of transport, using DfT's averages. There's a table with the same figures below the fold. 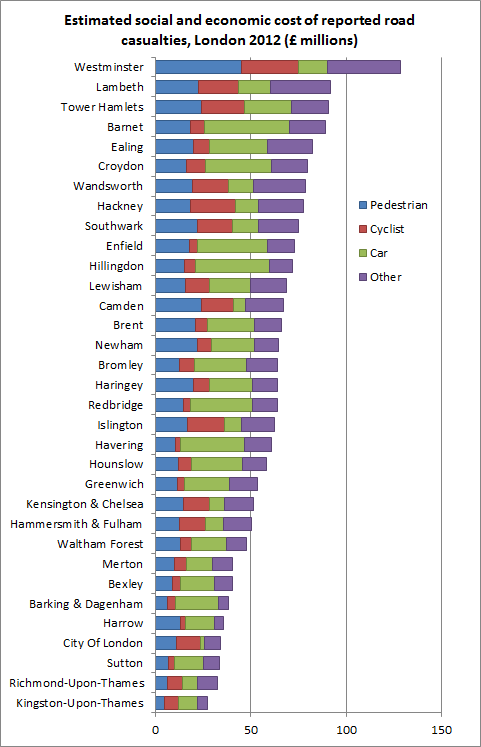 There are huge variations between boroughs in terms of both the scale and the composition of the costs associated with road casualties. The total cost in lowest in Kingston at around £27 million, and highest in Westminster at around £128 million. In Outer London boroughs car occupants account for a higher proportion of casualties and therefore of costs, while in some Inner London boroughs pedestrians and cyclists account for over half the costs, reaching 58% of the total in Westminster and 69% in the City of London. Across all boroughs the total costs by mode come to £523m for pedestrians, £345m for cyclists, £674m for car occupants and £518m for other modes (motorcycles, buses, taxis, goods vehicles, etc).

It's worth emphasising that these figures are bound to be an underestimate. Not only do they cover only reported casualties and excluse those that go unreported, but they arguably don't capture the full range of costs. Road danger results in 'avertive' behaviour, where people go out of their way to avoid particular danger-spots or choose to take modes of transport which are safer but slower or more expensive. These costs are very difficult to quantify and so they aren't included in the DfT figures.

Also, the average costs per casualty are likely to be higher in London than in other parts of the country, given the higher wages in London and therefore higher costs of lost output and higher 'willingness to pay' to avoid casualties.

It may sound callous to talk about road casualties in terms of money but this is really just a way to try and quantify the non-monetary costs in a rigorous way. And I think these figures could be a useful tool for campaigners too. Some boroughs don't seem to attach enough importance to road safety (or road danger reduction, if you prefer), but if the government were to levy fines on them in proportion to these costs I think it would concentrate minds pretty rapidly.