Homeownership and growth in the great recession

There has been a bit of a discussion going round about the link between home ownership rates and national prosperity - see Marginal Revolution, Matt Yglesias and Melbourne Urbanist.

The upshot is that when you look at the data, home ownership rates seem at best uncorrelated with prosperity at national level and possibly even negatively correlated. Lots of poor countries have very high levels of home ownership while at the other end you've got countries like Switzerland and Germany, who seem to have got by pretty well with ownership rates of less than 50%.

Part of this pattern, in Europe at least, is explained by the fact that many post-Soviet countries simply handed over ownership of public housing to the occupiers en masse as part of their economic reforms in the 1990s, instantly creating very high rates of home ownership.

But another big part of the explanation is that wealthier countries are more urbanised, and higher rates of urbanisation mean lower rates of home ownership. Big, dense cities are great wealth creation machines, and higher-density housing is more likely to be rented than owned, partly for reasons of population transience and partly for reasons of efficiency - owning an apartment is a risky business because you are so affected by your fellow building occupants, so it often makes sense to let one landlord own the whole building and absorb all those inter-apartment externalities.

Lastly, Andrew Oswald has argued that higher rates of home ownership impede the labour market by reducing mobility (because selling a house and buying another is generally more costly than moving between rented houses), thus lowering long-run economic growth. Argument still rages over this theory though.

What I think has been left out of the discussion so far (apologies if I've missed it from anyone else) is that countries with higher rates of home ownership also seem to have done worse out of the 'great recession' of the last few years. The chart below shows home ownership rates in Europe in 2009 (from Eurostat) against the change in per capita GDP between 2006 and 2011, adjusted for inflation (from the IMF). The size of the bubbles represents current GDP, also from the IMF. 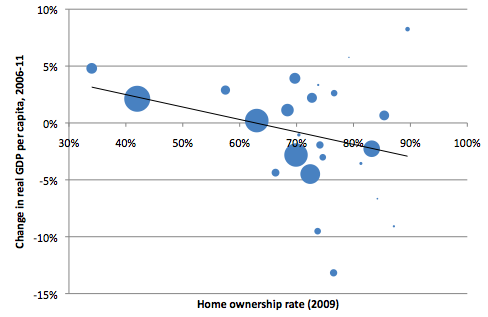 The two countries on the left with lowest rates of home ownership are Switzerland and Germany, and both of them have actually seen positive per capita GDP growth in the last five years. On the far right you've got two very small countries with very high home ownership rates and very differing fortunes of late, Slovakia having posted pretty strong economic growth of 8% over the period and Estonia having lost about 9% of GDP. Of the bigger countries with home ownership rates over 70% only Norway and Belgium have grown over the period, while Italy, Spain, Portugal, Finland and the UK have all seen economic contractions. And then there's Greece down there at the bottom. Obviously this leaves out anything that has happened in 2012 so far or is about to happen, and it certainly looks at the moment as though the likes of Spain, Italy and Portugal are looking at more recession to come - possibly very deep and long ones if things go really awry.

So what should we make of this pattern? Is it just coincidence, or just the result of some other factor? It could, for example, just be that poorer countries have more home ownership (as above) and poorer countries did worse in the recession for some other reason. We would need some careful analysis to identify the real causal paths, but as far as I can see there has been zero academic work done on this so far. That's surprising, but it does at least leave a nice big gap for speculation to fill!

The key features of the great recession in most countries were/are bursting property bubbles and credit crunches. What a high rate of home ownership does is expose more households to asset price increases in the bubble phase (possibly increasing the risk of 'irrational exuberance') AND to big drops in wealth from falling house prices in the bust phase, which then lowers household spending as they try to restore their balance sheets. Meanwhile, the drop in bank lending freezes the owner occupied housing market, making it harder to move house unless the rental market can quickly expand. So you've got a combination of job losses (from the wider recession), lower consumer spending even where people haven't lost jobs, and barriers to mobility making it harder for markets to adjust.

Another way of putting it is that high rates of owner occupation make the wider economy vulnerable to falls in housing demand, because falling house prices make owners want to spend less. But in a country where most people rent, lower housing demand (e.g. through job losses) result in falling rents, which frees up money for higher spending in other areas, helping to stabilise the economy.

There may well be benefits to home ownership (e.g. owner occupiers may take better care of their homes and it may provide a more stable environment for children), and politicians tend to like it, but I think the experience of the last few years suggests there are potentially quite large downsides too.
Posted by Jim at 08:47