People are using their cars less (but still quite a lot)

There has been much talk here and in other countries about the apparent declines in personal car travel seen in the last few years. Generally these are relatively small declines compared to the huge increases in car travel seen in previous decades, but if per capita car travel has peaked and is falling then that would at least be noteworthy from a social point of view, and possibly quite important for transport policy - see for example this letter from the head of the Transport Planning Society arguing that the Department for Transport's London traffic forecasts are out of whack.

The chart below shows my calculation of daily car travel in miles per person in Britain from 1949 to 2010, derived from these DfT statistics on car travel and population data from the Census and from ONS mid-year estimates. 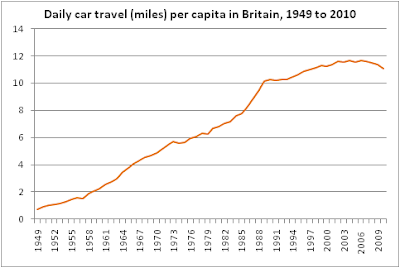 According to these figures, per capita daily car travel peaked in 2004 at 11.7 miles and has been trending slowly downwards since then. A couple of caveats are probably in order at this point: we are in a recession, which usually reduces travel, and while these figures are per person, strong population growth could in future increase total car travel even if the per capita average continues falling. Finally, the reduction in car traffic is slightly offset by a rise in light van traffic over the same period.

We've also got data for London, though only going back to 1993. The chart below uses population data from ONS but published on the London datastore. The trend here is quite different, already flatlining in 1993 and falling fairly consistently from the turn of the millennium. While car travel per capita has fallen across London, the drop is particularly large in Inner London, down 28% over the period. The average Inner London now travels a shade under four miles a day by car, compared to just over six for Outer Londoners and eleven for the average Briton. Lastly, much of the talk in the US is about whether car travel is particularly falling among younger people. To try and get a feel for this I looked at data from the Labour Force Survey on the main mode of transport people use for getting to work. Obviously the caveat here is that commuting is only a subset of all travel, but it's the best we can do for now. The chart below shows the proportion of people in broad age groups who reported travelling to work by car in 2004 (the earliest year I could find) and in 2011.


It's really important to emphasise here that this is based on a sample survey, so the estimates have confidence intervals around them (the little black lines). This means that in most cases the change is not statistically significant - including the apparent increase in car use among 16-19 year olds. The only age bands in which there was a clear, statistically significant change over the period were 25-29, 30-34, 35-39 and 50-54 year olds, all of whom were less likely to drive to work in 2011 than in 2004. So there's evidence of a fall in car commuting, but mainly by the 'young-ish' rather than the young (only around half of whom commute by car anyway).
Posted by Jim at 20:08