UK house price to rent ratios aren't all that reliable

The Economist has a nifty interactive resource showing trends in house prices and associated indicators for a bunch of countries. It includes trends in the ratio of house prices to rents, which in theory should be useful as an indicator of over- or under-valuation in house prices - if prices are very high in relation to rents then that's a sign that they are over-valued as an asset in comparison to the income stream they can be expected to earn. According to the Economist's data, the price to rent ratio in Britain is still way above its historical average, and this is evidence that housing is over-valued as an asset. 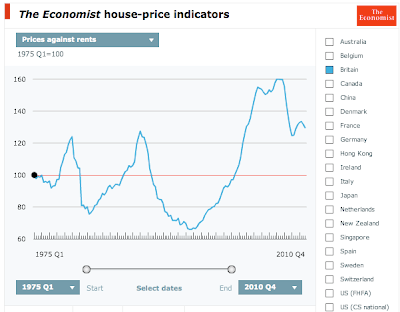 That could well be true, but I think we should be cautious in how we interpret these figures, because constructing them is not at all straightforward, perhaps particularly in Britain. That's because while we have a bunch of house price indices we have no equivalent for market rents: that is, no reliable and comprehensive data on trends in average market rents, from either official or private sector sources. So what is the Economist using? They say the data is from Office for National Statistics but are no more specific, but since ONS to my knowledge don't have any dedicated market rent data my guess is that they are relying on the 'Rent' component of the official CPI/RPI indices.

The problem with that source is that it includes not just private sector but also social rented housing, i.e. council and housing association stock (see here for the 'basket' of goods and services included in CPI/RPI). But social housing rents are strictly controlled by government regulation, so the trend in social rents is typically quite different from the trend in market rents, making the CPI/RPI rental index a poor proxy for either.

So I would be much more cautious than the Economist, who confidently assert here that British house prices are 30% over-valued and do the same calculation for a bunch of other countries, the data for which may or may not be any better than for Britain. The benchmark used to identify over- or under-valuation is a long-run average, but even leaving aside the very large problem of data quality it is not clear to me that the level of the price/rents ratio in, say, the late 1970s is a good guide to what it should be in the 2010s.

Anyway, there you have it. Note that I'm not saying British houses aren't over-valued, just that you can't really tell from the market rents data we have at the moment. I have heard that the Valuation Office Agency will start publishing statistics based on their very extensive market rents database soon, which would be great, but that still won't provide the kind of historic trend the Economist's table requires.
Posted by Jim at 18:47